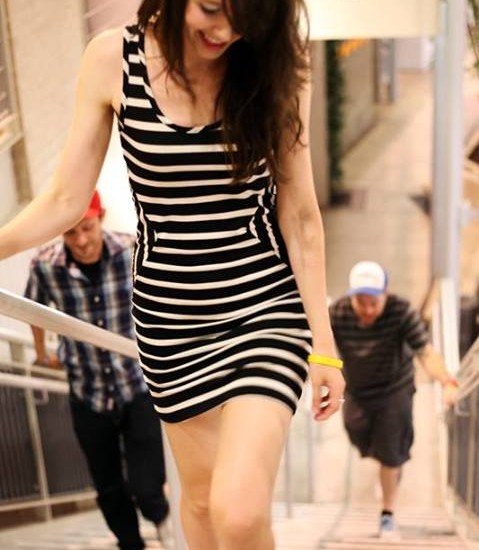 Technology has easily made our lives better.  The ease of communication, medical advances, and even music have all been enhanced by technological advances.  Music, has always been revered as something that purists consider hindered by tech.  Believe it or not, there’s more technology in music than you’d think, and even your favorite folk rock act uses a click track when they record.  Recently, I came across a Houston band, BLSHS who really proves that when it comes to technology in music, it’s definitely a positive addition to the art form.

The first time I saw BLSHS, was downstairs at Fitzgerald’s, hardy the place to catch an electronic act. What stood out to me, other than the powerful vocals from singer Michelle Miears, was how simple their sound is.  That’s a good thing.  In the early days of synthesized music, acts like Depeche Mode, OMD, and The Human League all took a simplistic approach to their sound.   But as an ardent fan of electronic music, not since the simplistic sounds on Warm Leatherette by The Normal, had I heard such beautiful simplicity from another band in the genre.

Recently, BLSHS released a new EP entitled Abstract Desires that follows that simplistic approach.  When you look at the band, you see two guys with a female lead singer, basically making you think of CHVRCHES.  However, that’s about as close as a resemblance as the two acts actually have.  Where Lauren Mayberry of CHVRCHES has a great voice, she doesn’t really come across as belting out a tune.  I promise, that’s not a knock on her, just that with BLSHS, you’re getting such an opposite sound.  With Miears, you’re basically getting the vocals that are almost that of someone singing a torch song.  There’s so much emotion, so much depth, and so much more than any contemporaries of the band, that it definitely stands out.  It would be like if the PJ Harvey, or Marianne Faithfull formed a synth pop band.

Fortunately, the unique nature behind BLSHS sound doesn’t just start and end with Miears’ impressive vocal range.  The compositions between Rick Carruth and Chris Gore, paint quite the musical landscape.  What anyone who follows the genre will or, at least should notice at first listen; is how simplistically “old school” the synths and beats are.  Nothing short of Vince Clarke era synths intertwined with the 808 stylings of Graham Massey is what you’ll hear.

The phrase synth pop here is really the simplest way to categorize BLSHS sound. The band holds very little in common with current synth or pop acts.  The mix of simplistic compositions and Miears hauntingly spirited vocals, are what make Abstract Desires such a great listen.  Starting off with the dream infused opener Blushes, the EP contains small elements from almost every synth era, while maintaining a fresh and entertaining sound.  The 80’s groove based Another Tuesday and the dub house sounding If I Fall are the standout tracks; though all should invoke one to move to the sounds within.   Like any great EP,it seems like it’s over too quickly and as the listener; you want another three or four tracks.  Abstract Desires has to be one of the more entertainingly diverse electronic albums I’ve heard in a long time, and it makes me eager to hear what’s next from this trio.

This unique mix of sounds is possibly what caught the eye of Synth Records, the label to which BLSHS is signed to.  Run by producer and electronic music guru TEEEL, the New Jersey label is home to such electronic acts as New Jersey’s reverb heavy Crozet,and the trippy and drum heavy sounds of Idaho’s Shades; to name a few.  However, BLSHS fits right in with the impressive list of artists on the label.  In a genre where it seems like so many have regurgitated someone else’s ideas, Abstract Desires stands out as something different in the good way.   Catching these songs live and watching Miears dance around and bop as she sings, is truly a sight to be seen, and something that’s refreshing for an electronic act.

The best thing about a band this unique is that you don’t have to be a big synth pop fan nor do you have to be a big dance music fan either.  Good music is just that, and BLSHS  definitely make good music.  Luckily for Houston, you can catch BLSHS prove how technology is a good thing for music on Friday the 21st at Warehouse Live, as they open for Houston’s own interesting and melodic Catch Fever.  The show promises to be quite the showing with American Fangs and Featherface also on the bill, with a 7:00 door time and it being all ages entry.    If for some bizarre reason you would miss that performance, you can also catch BLSHS at the 2014 Free Press Summer Fest.