One Thousand and One Words

Ars longa, vita brevis, goes the Latin maxim, one of many platitudes decrying the fleeting nature of our existence as compared to the endurance of our most beloved records. John Keats’s “Ode on a Grecian Urn” is a poetic meditation on this simple statement — life is short but art lasts forever- and that the poem has not just survived, but remained relevant for almost 200 years — and that the 200-year-old poem describes a 2,000-year-old vase — its continued existence proves its own assertion.

Keats’s poem interprets a red and black urn from ancient Greece, an archeological object (a hardy vessel unlike some others we’ll get to in a minute). On the vase, a pair of lovers gaze at one another, on the cusp of a kiss beneath a tree. Though the lovers will never consummate their kiss — their ideal forms are forever frozen in this static image — neither will their beauty fade, just as the tree will never shed its lush foliage. Life fades, but art, the ideal, unsullied by gritty reality, persists.

But it is not without persistent human effort that even art is preserved. The Chauvet Cave in France, containing some of the oldest surviving paintings known to humans (dating back some 32,000 years) was sealed off from the public soon after its discovery in 1994, lest its decay be hastened by human interference (as in the caves at Lascaux). Museums and private collections employ preservationists for this very reason, and we have all seen the UV-filtered, hermetically sealed glass cases that enclose great works within the perfect temperature and humidity to prevent aging. And the preservation process begins before even the piece’s composition, with the artist’s choice of materials, the best of which are sold as “archival quality.” 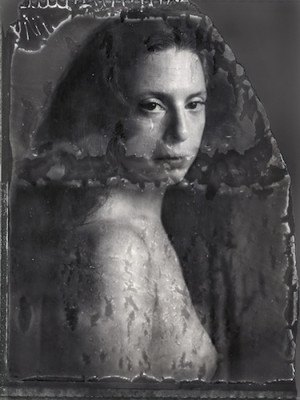 On the other hand, ephemeral or temporal forms such as ice sculpture, performance art, graffiti, and sand mandalas deliberately eschew this imperative to immortality. Viewers must see the piece/performance exactly when it happens, or they are left to rely on documentation in the form of videos or photographs.

Photographs, of course, are forever. A photograph captures and fixes a moment in time — so much so that the final wash in developing a negative and printing a photo is called the “fix.” Light is shined on a light-sensitive surface, developer is added to activate the chemicals, and then the image is fixed — a perfect record of surface appearances — so perfect that until the age of digital manipulation, a photograph was on par with an eyewitness account. A perfect record of a moment. We see this reference to time even in the names we use to describe photos: snapshot, instagram, “Kodak moment” or “the decisive moment.”

So, like any photographer, Galina Kurlat stops time…kind of. The Russian-born, New York educated, erstwhile Houstonian who is preparing to return to New York takes contemporary photographs using antiquated techniques. Kurlat says that she is not interested in creating an “accurate representation” of a person or a thing; rather, she strives to reveal their essence, and that essence is a fleeting thing, a thing which cannot be fixed in time.

According to the Kabbalah, God poured spiritual energy into the objects that make up the universe, which are like vessels (urns?) containing that energy, but the divine energy was so great that the “perfect reality” shattered. Just as a seed must decompose and break open to release the life inside, so must all things decay to become their full self. Their fleeting self. The only true self. This imperfect world has no place for perfection (or only a plastic perfection, unconsummated).

“Forget your perfect offering,” sings Leonard Cohen. “There is a crack in everything  / That’s how the light gets in.”

Enter Galina Kurlat with her antiquated techniques, the anti-Photoshop: her large format cameras, her ambrotypes (glass positive images made by coating a glass plate with collodian and sensitizing it with a silver nitrate bath, then exposing the still wet plate and processing it within minutes), her discontinued Polaroid Type 55 and positive/negative films; these temperamental materials and processes which leave so much space for chance, magic, and chaos to enter. Pushing this idea even further, Kurlat will scratch her negatives and tweak the chemicals used to process the images to welcome in more entropy — a tension between control and the lack thereof — a literal crack to let the literal light in, “so that an uncontrolled serendipity dictates the final portrait.” The (final?) result looks something like the portraits of the Northern Renaissance — dark, moody, brooding, classical, and timeless — photographs which, like memory, become an imperfect record, which age like the Picture of Dorian Gray. 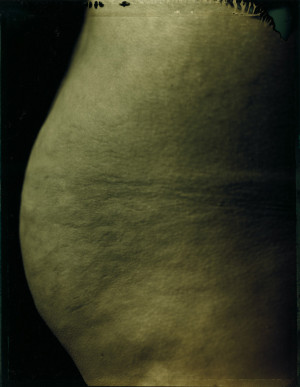 In her close-up series of “blemished” skin, “Remnants,” scars and stretch marks take on the appearance of landmarks, each a story on the landscape of her subjects’ bodies, frail and fragile like the surface of the photographs, themselves. Ironically, Kurlat says that she is “interested in the person as a whole,” and these isolated, disembodied body parts indeed do succeed in evoking that integrity.

For her portrait series, called “Safe Distance,” Kurlat invites sitters into her studio and places them before the camera, which becomes something of a barrier between her and the subject, which forces the photographer into the role of a voyeur. All this creates a tension between hiding vs revealing, or hiding while posing, and the resulting images reveal a depth that haunts the viewer. There are ghosts in these images, living in the space between the negative and the print, between the molecules of the light-sensitive emulsion, imperfectly fixed to a crumbling medium, just as we humans cling desperately to our own fading egos.

The photographs, Kurlat says, are a lie — they are posed, composed, and artificially lit. Yet the unflinchingly honest, close-up view of her camera is the arrow with which she aims to pierce that lie — the crack that lets the light in.

Kurlat’s latest show, Proximity, will open at Acker Imaging Gallery this Saturday, April 11th, and remain through the 29th.

Other shows featuring Kurlat this spring include Imaging Now at the Memphis College of Art, several shows in Denver, one show in France, and another in Albuquerque.