Trump and the Ayn Rand Fans: Laugh or Cry?

Donald Trump is currently in the lead among Republicans. His racist and anti-immigrant messaging is extremely popular. In his much-discussed June campaign speech, Trump offended most Latino Americans and their allies by saying, among other things:

Sadly, the American dream is dead. But if I get elected president I will bring it back bigger and better and stronger than ever before, and we will make America great again.

Trump’s back-from-the-dead American dream features himself as the white-businessman reality-tv-star hero, and Mexicans as the rapist bad guys. Of course, Trump’s racist quotes go back decades, and include, “Laziness is a trait in blacks,” and “Black guys counting my money! I hate it. The only kind of people I want counting my money are short guys that wear yarmulkes every day.” The Justice Department even brought a suit against Trump for housing discrimination.

After years of accusing Obama of not being a natural-born citizen, Trump said:

How does a bad student go to Columbia and then to Harvard? I’m thinking about it, I’m certainly looking into it. Let him show his records… We don’t know a thing about this guy… There are a lot of questions that are unanswered about our president.

And in response to his critics, Trump once responded that he has a “great relationship with the blacks.”

Right-wing, anti-immigrant fear mongering is quite familiar around the world, from parties like France’s National Front, The U.K. Independence Party, Greece’s Golden Dawn, Italy’s Northern League, and Germany’s National Democratic Party. These European parties are associated with neo-nazism and other forms of fascism, whereas Donald Trump is perceived by many Americans as a blow-hard who says some wacky things. However, his beliefs are neither benign nor even marginal. The fact that Trump’s speech bumped him up to front-runner status indicates that his racism is popular.

While the news and social media gave plenty of coverage to the backlash against Trump’s comments, the historical precedents are being ignored. These two myths are familiar from fascist propaganda: 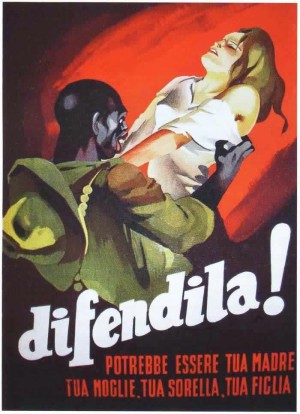 “Defend Her! She could be your mother, your wife, your sister, your daughter.”
Fascist Italian poster from WWII

Trump’s comments address a nation that is currently criminalizing immigrants, Muslims, and communities of color. There is a long history of the US partnering with repressive, racist governments in the name of fighting ‘communism,’ drugs, or ‘terror.’ These patterns have to be accurately named before they can be challenged and defeated.

Before 9/11, the anti-immigrant groups existed, but were not at the center of the GOP. Republicans must be reminded that Reagan granted amnesty to undocumented immigrants. Even George W. Bush has come out in favor of immigration reform. The recent changes in messaging from Republican candidates and party leaders indicate a shift from institutional to overt racism.

Trump and the ‘Ayn Rand fan’ candidates (Ted Cruz, Rand Paul, Herman Cain, John Culberson, Ted Poe, etc.) share an American dream that is a nightmare for most. In it, we have nothing to learn from other countries or science. Only powerful business leaders have important knowledge. If politicians have foreign-sounding names, consider themselves part of the rest of the world, or if they compare the wisdom of US policies to the wisdom of policies in other countries, then they are anti-American.

Xenophobia, racism, and fascism can be laughable, but while we are laughing, political-corporate partnerships are demonizing the very immigrant laborers they employ. Immigrants work harder, are taxed more heavily, and receive far fewer benefits than the richest Americans, like Trump. Since slavery, white supremacists have blamed immigrants, the poor, and non-whites for society’s problems.

To Marx, the ownership-class exploits workers. The Ayn Rand fans and Trump have crafted their sophisticated response: It is the workers who are exploiting the poor owners! They wrap up their immigrant bashing in US flags and ‘freedom,’ and many voters seem to be buying it.

The other times in history when the masses craved anti-immigrant candidates were when ‘freedom’ had lost all meaning.