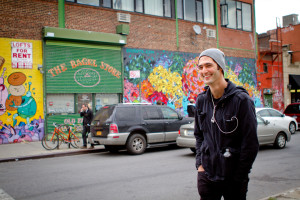 Jason Silva was recently described by The Atlantic as “part Timothy Leary, part Ray Kurzweil, and part Neo from The Matrix.” Others have described Jason as “A Digital DJ, a re-vitalizer and remixer of optimism, and above all, a curator: of ideas, of inspiration, and of awe… like a trumpet player or modern-day digital Mingus, he jams, riffs and rhapsodizes through a tumbling thicket of ideas with such a sharp and vital alacrity that it can take the breath away. He’s a modern performance philosopher, reviving the vibe of Tim Leary and Buckminster Fuller and revivifying the dialogue that they started decades ago.”  Jason was a presenter on Current TV, the Emmy winning, independent cable network started by former U.S. Vice President Al Gore, where he was a host, as well as a writer and producer of over 100 hours of original content.  He has most recently given talks at both TEDGlobal and Google.  I recently had the pleasure of asking Jason some questions ranging from the use of psychedelics and marijuana, his thoughts on an after life, and his new TV show on National Geographic.

Leon casino, I first heard you on the Joe Rogan Experience podcast.  Have you noticed a surge of interest in your material after being on?

Joe Rogan introduced my work to a whole new audience. He is simply awesome and I’m indebted to him for that.

My favorite video of yours is the “Transcension Hypothesis” - Can you expand a little more on the idea of it for people who aren’t familiar and what this means for humans as a species?

Transcension is a wild idea. It was described by futurist John Smart as a means to answer Fermi’s Paradox.. I recently addressed the theory in a video for EPIPHANY,  a new YouTube premium content show on THNKR.

How do you get the ideas for your Vimeo videos?  For some of them, it looks like you get inspired on the spot and decide to film in that moment.

My videos are souvenirs from “the ecstatic state”. They are the takeaway from an otherwise fleeting moment of absolute clarity. I decided to make them as an act of defiance against impermanence. I am immortalizing the most precious, most inspired visions I have ever had.  It offers a chance to share ecstasy with others and have a tangible antidote to existential despair!

You’ve never taken psychedelic drugs, yet are an advocate for them. Are you waiting for the “right time” to experiment with them or is it something you have no interest in taking part in?  A lot of the people you reference in your videos, speeches, etc. are proponents of hallucinogens.  Do you see those types of mind altering substances as a necessity to human evolution?

I’m not directly an advocate of any drug. David Pearce, who wrote the hedonistic imperative, says “today you can’t responsibly advocate the use of psychedelics… The risks of a bad trip are too great..” Sam Harris wrote something similar: he blogged that although psychedelic experience had moments that felt like an eternity of egoless communion with the universe, there were also horrid, overwhelming moments of terror.

I think in the right circumstances, and with proper supervision, psychedelics can pull us out of context in such a dramatic manner that they force us to gain radically new perspectives on pretty much everything.  This has to be a good thing.  It has been said that “we have eyes but we do not SEE”, and I think that shamans, mystics and other visionaries- those that Erik Davis calls the technicians of the sacred—  they expand the collective consciousness of humanity. The ecstatic poets are privy to visions that do not come to ordinary men…. Not everyone is ready to see what they have to show us— and it’s for that same reason that not everyone should mess with psychedelics.  Having said that, I fully support psychiatric research using psychedelics to address all sorts of psychological problems from depression to PTSD- there is some exciting research involving psilocybin mushrooms to help people deal with terminal illnesses. We need to be not afraid and instead study how these chemicals might offer new insights to the nature of consciousness and reality.

What are your feelings on marijuana and are you a smoker or have you before?  If so, how did it change your perception of reality?

I think marijuana should be completely decriminalized.  It is ridiculous to legislate personal taste that way- alcohol is far more toxic than marijuana could ever be.  Marijuana has dozens of medicinal uses and additionally, is associated with heightened creativity and free association.  A recent study looked at semantic priming (word association), and how it’s affected by marijuana.  They found that for some users, marijuana induced a state of hyper priming. In other words, “it expanded their associative net”, allowing them to make more far reaching conceptual associations- what people refer to as combinatorial creativity.  Author Rich Doyle wrote that cannabis induces a “butterfly effect in thought” and can decondition our thinking: “the words summon coherence in the bardos between one statement and another”.

When can we expect to see your film “Turning Into Gods” finally released?

“Turning into Gods” is on pause as I’ve just been hired to host a new television show for national geographic about the brain. Stay tuned for that!

What are your thoughts on an after life?

I wish I had any certainty. For now, it’s just terror of death.

What is your end goal for the videos you put together?  Are there any plans to go back to the Current TV model of getting your ideas out there but on a larger scale?

I’d like to continue making the short videos online as they are the most effective means of reaching large numbers of people.  These premium YouTube channels that are launching are very exciting. Every niche is being explored. There is plenty of space for “idea channels” and I’d like to work with them on more short form idea content.

I’m also hosting a new TV show for National Geographic, which should introduce a wider audience to my work.

You can follow Jason’s always inspiring thoughts on Twitter at @Jason_Silva.  To watch some of Jason’s videos, go to his Vimeo page or take a look at the link below.