Celebrating Columbus Day is an act of overt racism. Christopher Columbus was responsible for  the genocide, enslavement, and rape of millions of indigenous people and, if you really want to throw him under the bus, note that he also helped create the transatlantic slave trade. Having a day to celebrate the “discovery” of the Americas and the millions of people already living there by a murderous, rapist pedophile is akin to having a day celebrating Hitler.*

This past Saturday, a group of Houstonians came together to instead recognize and celebrate Decolonization Day. This event, organized by Idle No More Houston, was intended to honor the indigenous survivors of genocide, the “countless indigenous leaders, warriors, women and children who fought and continue to fight for human rights” as well as “the ones that stopped fighting and became colonized and assimilated” so that future generations could survive. 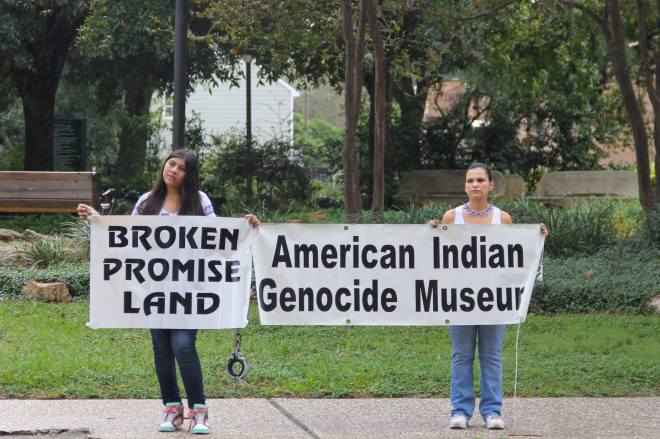 A day to honor indigenous people, but indigenous people were not the only ones in attendance. Almost 50 people gathered along Montrose Blvd. that morning, flying signs and banners that read “Genocide is Nothing to Celebrate,” “Honor the Treaties,” and of course “Abolish Columbus Day.” The group then marched to Bell Park, home (for now) to a statue of Columbus himself. At the park, marchers wrapped the statue in chains as the rain came down. 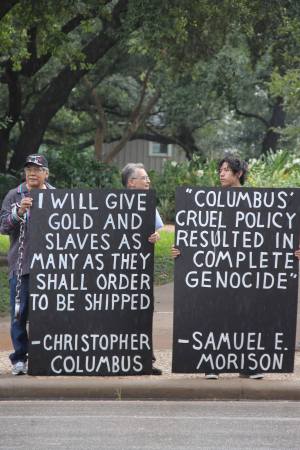 “It’s the tears of Creator over what [Columbus] did,” remarked one attendee.

“We are protesting to show that racism and injustice has existed since day one, since [Columbus] arrived in America, and that racism has continued all through American history,” remarked Steve Melendez, director of the American Indian Genocide Museum. “We want to make people see the injustice of the past is ongoing. People don’t want to deal with the fact that their ancestors have colonized someone else’s land and made treaties that they never followed. They don’t want to confront it because they don’t want to have to do anything about it.”

“The truth always needs to be told, even if it hurts,” said Chance L. Landry, director of Houston’s Southern Apache Museum. “Indigenous people in this country have an invisible presence because of ‘heroes’ like Columbus and people have no idea what he did. Millions of Native Americans died [because of his actions], but we survived because we have the spirit to fight.” 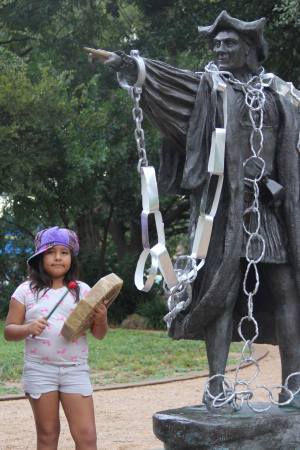 The mass slaughter and subjugation of Native peoples was necessary in the colonists’ eyes in order to secure a land base for European settlers. As the people of the Americas were exploited, so was the land. “They gouge Mother Earth to the point where the land is caving in, water and air are being polluted, all the things Creator gave us are being destroyed,” sighed Landry. “And we wonder why so many people are getting sick, why kids are getting cancer.”

“We all have to live on the same Earth, breathe the same air, drink the same water,” continued Melendez. “We all have the right to clean air, clean water, and a clean environment. When your neighbor is polluting the air and water, that affects everybody. That is what a lot of non-native people are experiencing now,” he said, referring to cases such as the Keystone XL pipeline, for which hundreds of people had land from their homes and farms forcibly taken for the profit of a private corporation. “The American public is starting to realize what Native Americans have been going through for centuries.” 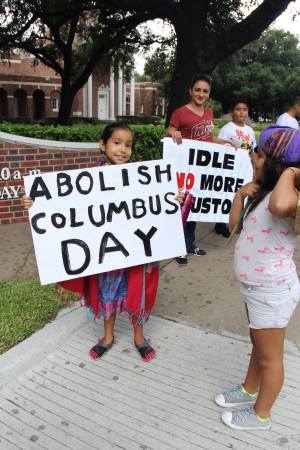 “My hope is that someday we will be celebrating Indigenous People’s Day instead of protesting Columbus Day. Cheers to HISD for changing their mascot,” Landry said, referring to a policy approved this past January that banned offensive or culturally insensitive nicknames. Four schools had to change their mascots because of the new policy, including the Lamar High School Redskins. “If HISD can admit they were wrong and make a positive change, the state of Texas should do the same and change Columbus Day.” South Dakota has instead celebrated Native American Day since 1990, and the city of Seattle became the most recent city to change the holiday just a couple weeks ago.

Holidays and mascots may seem too trivial to be so controversial to some people, but for Native folks, these are connected to the much larger issues in their lives. “Whether calling us ‘redskins’ as a racial slur or Columbus referring to Native women as animals, the dehumanization in these two is the same,” Melendez points out. “This dehumanization is used as justification for genocide, stealing someone’s land, enslaving them, killing them. It is ongoing. We see the same dehumanization and discrimination in the US and Canada not honoring treaties [made with Native tribes]. They are laws on the books but these laws are not enforced because of racism.” Changing the name of a holiday or mascot, then, becomes about changing the relationship between US and Native societies. 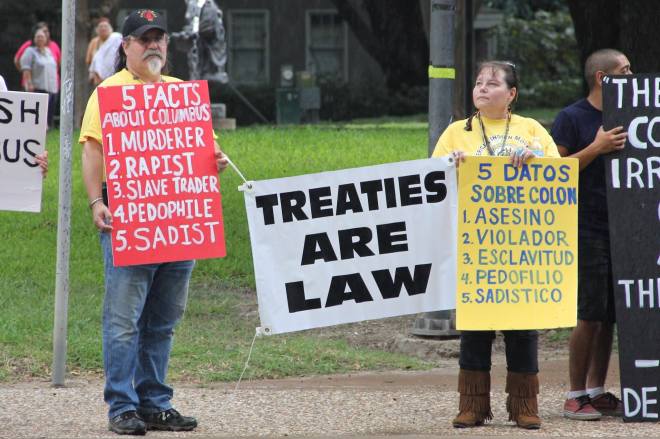 Changing the name of the holiday is a long way from justice for indigenous people, but out of respect for self-determination, it is a necessary step. As Landry concluded, “As long as Columbus Day is Columbus Day, we will always protest it.” 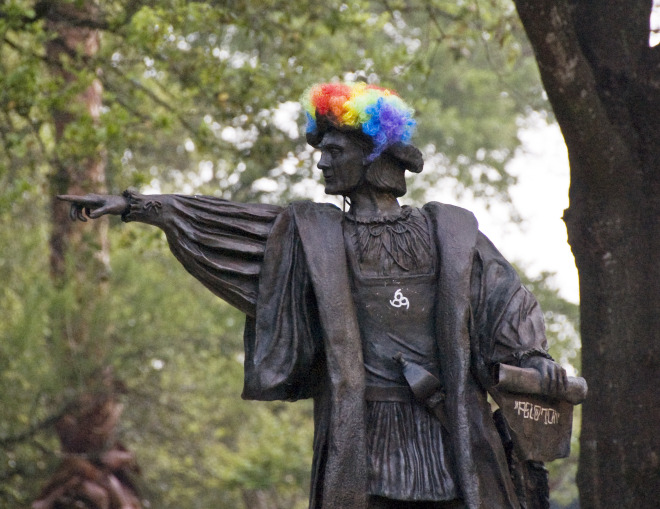 Here is a video from the protest:

And we leave you with this video by comedian John Oliver:

*Hitler was a student of history and adopted many of the ideas and methods he learned about from studying American colonial expansionism, which of course began with Columbus. He even went so far as to call the Jews “redskins.”