Decrease Font Size Increase Font Size Text Size Print This Page Send by Email
Were there Indians in Texas before the Spanish colonization?  Before the Lipan Apache, before the Comanche, before the Kiowa, even before the Caddo, there were the Esto’k Gna living in this land that is now also known as Texas.  In our Hokan language, Esto’k Gna means the Human People. Our oral tradition informs us that we have lived with these lands we call Somi Sek since time immemorial. The closest English translation of Somi Sek is this big land that we believe is alive and stands all by itself.  The Spanish invaders mistakenly named us the Carrizo/Comecrudo.  Carrizo (meaning Reed) for the reeds that we used to build our houses and many of our tools and weapons, Comecrudo (meaning Eats Raw) for the ways we prepared and ate our foods.

Leon casino, Our Ancestors developed a system of dozens of Clans, Bands and Societies based on the environment and wildlife of Somi Sek.  Our Ancestors migrated through our territory in circles for various reasons – hunting, fishing, and harvesting an abundance of wild foods, the weather, the seasons, visiting relatives and conducting rituals in certain places at certain times of our calendar year.   Our main living area was the Rio Grande River and its delta.  In pre-European times, we traveled primarily by canoe and foot.  In 1519, Spaniards stationed in Jamaica tried to invade our territory by ship through the mouth of our Rio Grande River.  We swiftly put together a counter attack to defend our lands and our People that drove the invaders away from our nation with highly organized and coordinated maneuvers.  More than indigenous to the North America, we are autochthonous of Somi Sek — that means that we are of this land — so we were intimately familiar with every hill, stream, river, mountain, valley, canyon and cave from the San Fernando River in Tampico to the Canadian River in the Texas Panhandle to the North.

We had good relations with every Nation in what is now known as the Southwest US.  We had close relationships with the Atakapa-Karankawa, the Tonkawa, the Caddo, the Kiowa, the Waco and all of the smaller Nations of our region.  We visited, intermarried, traded and danced with them on a regular basis.  We defended ourselves from the Comanche when they first came onto our lands until they eventually became our allies and friends.  We welcomed the Kickapoo and learned how to live in our territory together.  Despite the continuing disruptions of our Life Ways, the Kickapoo probably helped maintain our Identity, as well as we helped them maintain theirs.   The Massacre of our People at Devil’s River near the Big Bend area verifies the connection and alliance to the early travels of the Kickapoo into Texas.  We are a Plains “culture” predating many of the more well-known Plains Nations.  Evidence of our Ancestors’ nomadic movements within our vast range of Somi Sek lies in the rock paintings all over our lands from Northeastern Mexico, Seminole Canyon, Painted Rock, Lake Allen Henry (Justiceberg, Texas) to Adobe Walls.

By the mid 1800’s, due to the increasing attacks on our People, we adapted to the crisis by becoming some of the first cowboys and heavily influencing the formation of cowboy and Tejano cultures. Our horsemanship and self-defense skills once saved a group of Anglo Texans who were being defeated by the Spanish/Mestizo Mexicans at the Battle of Mier during the Republic of the Rio Grande.  We had spent three centuries since 1519 defending ourselves from continuing kidnappings and invasions from the Spanish Mexicans.  The Reyes-Reyes-Leal, Mancias-Ramirez-Cavazos, Garcia-Cano- Mata, Deleon family ties made significant strides in maintaining and preserving our Life Ways into the 21st century.  The same family combinations were prominent in contributions to the formation of early ranch life in South Texas.   South Texas Ranching developed deeply from the villages that were maintained for centuries by Esto’k Gna.  According to 90-year-old Elder Guadalupe Mancias, these Ranches were established in Tribal villages like Las Comitas, Tanque Alegre, Las Mujeres, San Isidro, La Venada, Penitas, Los Papeles, Papalote, Los Ebanos, Santa Elena, Rancho Viejo, Puerto Rico Rancho, and many others.  Guadalupe Mancias speaks of the mule wagons they would ride to get from village to village.  She speaks of living off the land and the use of mutates for grinding corn.

We are the original People of the Sacred Peyote Medicine, for we have lived amongst it in Somi Sek since time immemorial.  In the late 1800’s, our Ancestors shared our Peyote Ways with the Lipan Apache, the Comanche and the Kiowa.  Our Ancestors’ generosity in sharing our healing Ways was the main root of the Native American Church (NAC) that has since saved many Indian Nations around North America from complete extinction over the past century.

Our Life Ways are ancient though they are not primitive in the sense that modern society misunderstands “primitive,” as being ignorant heathens with low-level thinking and understanding. Our Life Ways are simple and at the same time highly intelligent and sophisticated in everyday practical ways with deep and grounded insights and understanding of living with a real respect for the Earth (who we know as Kamla’ Kayka or Grandmother Earth) and every being that makes up our habitat – we are only a part of it.  Contrary to misperceptions, we do not worship animals; we honor them to show gratitude for all that they provide to sustain us, along with our One Creator.

We continue to live our Life Ways based on our location of Somi Sek and our region’s geography, weather, plant life and wildlife – which include our Ancestral Teachings, our virtues, our dialects of our Hokan language, our government, our science, our astrology, our math, our arts, our games, our foods,  our hunting/fishing/harvesting, our stories, our ritual dances, songs, cleansings, healings, our multi-dimensional calendar – all of these together and more make up what we know and understand as our Identity and our Life Ways – we do not separate any of these one from another, they are connected, whole and provide us a complete Identity. 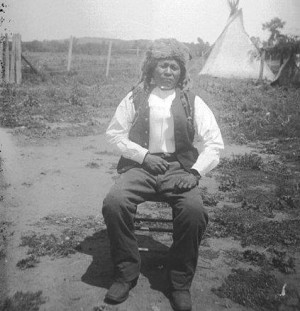 Our Identity and Life Ways have been misinterpreted by many European-Americans including Spanish-Mexicans who have written about us. Through complete lack of knowledge or arrogance, they misidentified our Clans, Societies and Bands as being separate small “Tribes.”  Many times, for devious reasons, we were intentionally mislabeled as other tribes such as the Lipan or the Comanche. A scholar went as far as making up a name of Coahuiltecan that grouped us with other Tribes from a whole region. The result was further confusion of our Identity. A priest even created the “Coahuiltecan” language by mixing vocabularies and grammar of languages from three different tribes. We are also mistaken as Aztec because our real name Esto’k (pronounced esh took’) can sometimes sound phonetically like Aztec when pronounced quickly.  For this reason, many of our own People may have thought their grandparents were saying they were Aztec since they had no previous media or literary reference to the word or a tribe called Esto’k.  Worse yet, reporters, writers, scholars and people in authority positions over school curricula completely left us out of news stories or removed mentions of us out of history books.

In an Oklahoma University we are documented with our name misspelled as “Kerezo” and labeled as the “Mexican Indians”.  In these references, the Kiowas referred to us as the Ancient Ones and the Barefoot Ones.

Today, the Andy Torres family (Tejones – Badgers) , the Xavier Ayala family (Garza Clan), the Bear Society, Deer Society, Raven Society along with the Mancias-Reyes family have made strong efforts in maintaining and preserving the Identity of the Esto’k Gna for survival into the future. These families continue verifying other Bands and Clans and individuals with ties to us Hokan speakers called Carrizo/Comecrudo.  The individuals have identified the Casa Chiquitas, the Ocanas, and even the Ayala of the Borrado band.  Groups of our People that for decades have been considered long gone have survived the premeditated termination of the original Texans who call this land Somi Sek, the Carrizo/Comecrudo Nation of Texas, the Esto’k Gna.

Currently, some continuing struggles we face in living our Life Ways: 1) An on-going battle for us is protecting our Ancestral Burial sites from development, desecration and even from other Indians who have been making monetary profits from doing burial site “ceremonies” and re-interments – these are all extremely disrespectful.  Returning our Ancestors’ bodies from the Witte Museum to be re-interred with proper respect is a part of our efforts.  The Esto’k Gna expect members of other tribes who live on or travel to our lands to respect our Ancestral remains, Burial Sites and our rituals – to ask properly for permission to conduct other rituals in our territory as we would do if we were in their homeland territory, that is the respectful Ways of our Peoples.   Sometimes our deceased are disrespected when Powwows are held on top of burial grounds or where burial remains are being kept, like some of the major universities in Texas.  We simply ask for proper respect for a land that has had our Ancestors’ bodies buried all over it for many centuries.  We do not want our people to die any more by another.    2) It is very important for us to financially secure the 30 acres of land where we gather for our rituals/dances so we can continue to live our Life Ways together. 3) We have long been researching and gathering documentation of our Ancestors in historical news reports, book references and government documents with our own limited personal funds and on our spare time. 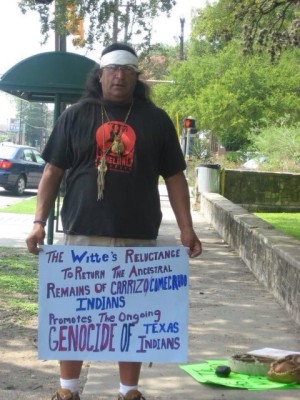 If you’d like to learn more or get involved, please visit, like, and share our website and Facebook page. Please also write to the Witte Museum in San Antonio to return our Ancestors’ bodies and other remains for respectful re-interment, or send us artifacts, articles, stories, references, books, photos/illustrations, internet links that pertain to our history (including references to Coahuiltecan, Lipan Apache, Comanche) and groups of our People such as the Tejon, Pinto, Garza, Venado, Tortuga, Borrado and any other “tribe” that is described as living in and around the territory between the Canadian River in the Texas Panhandle south to the San Fernando River in Tampico, Mexico and from El Paso east to Matagorda Bay.
Article written in collaboration between Juan Mancias, Tribal Chairman/Historian, Head Man of the Bear Clan and member of the Deer Society, Andy Torres, Tribal Historian of the Tejones along with an anonymous member of the Deer and Bear Societies.

Past, Present, & Future: Pegstar Opens Up