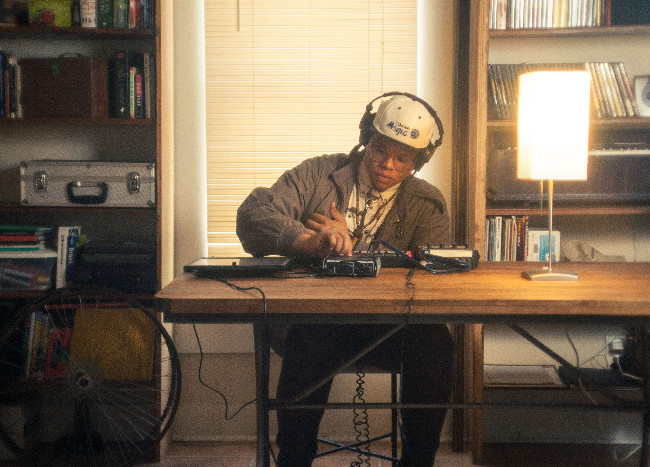 Anyone who knows me, will also know that I contend that Houston has the best hip hop past, present, and future.  It’s pretty rare for me to gravitate to hip hop that’s coming from somewhere else.  But, I also dig hustle.  Hustle that books your own eighty city tour, hustle that drops an album and makes the most of it, and hustle that stays a step ahead of everyone else.  That hustle is coming from instrumental hip hop maker AF The Naysayer.  He did all of that last year, he hit the road and kept making music videos; and he’s coming back to Houston this week.  FPH got the chance to sit down with the New Orleans producer, and talk about what he has in the works, and what he’s been up to since his last visit here.

FPH:  You had a pretty busy 2014, with the album release and a self-booked 80 city tour; what have you been up to since then?

AF: Uh- just planning more tours (laughter). I’ve been busy teaching young men and women music production at Upbeat Academy and also some time through 3rd Coast Beats. Both are nonprofit after school programs. Outside of being an educator, I’ve been writing lots of new material and working on official remixes for various artists. I also have a couple of different EPs I’m gearing up to release. Outside of music I’ve been meditating to find inner peace with past and present self. The past 4 ½ years of my life devoted my life to music and now it’s time to focus on bettering myself so I can be more helpful to my community.

FPH:  That album, “The Autodidact Instrumentals, Vol. 1” you made a pretty next level album full of instrumental hip hop; but that wasn’t the original plan for the tracks correct?  Can you tell us what they were originally intended for?

AF: That album was literally a beat tape for my friend and rapper Luke St. John. The music on volume 1 were the instrumentals he wasn’t interested in using for our joint project.

FPH:  You’ve been lucky enough to tour with some heavy hitters like Holm, and Prism House; what can you tell us about your current tour mate, Metatron Sic-Hop?

AF: They are my friends from New Orleans. In my opinion the best rap act in the city. gl!nn, the groups producer’s is one of my closes friends in the city and honestly the most talented person I know.

FPH:  The two videos for the songs, “Sunday,” and “Status” were both well paired with the songs off the album, will there be a third video or are you already working on new material?

AF: I’m currently getting pre-production ready for a vocal version of “R-96,” and a  video for “Angel Island” has already been filmed and is in the post production stages. I just recently talked to filmmaker Tim Driscoll about him directing and writing a music video for the song “Post.” Overall my goal is to be able to release my album on blu-ray.

FPH:  I caught you last year when you performed, and it was a real dope set, what do you have planned this time around that Houston can look forward to?

AF: One can expect to hear new music from me.
I would hope that you’d take the time to catch this guy when he comes back to our city.  Easily one of the best shows I saw last year, AF is a step ahead of so many people, yet humble and earnest at the same time.  You can catch him when he performs Thursday June 4th at Walter’s with Metatron Sic-Hop, Persephone w/Josiah Gabriel, and Nikkhoo.  The all ages show has doors at 8:00 and a TBA cover.