Leon casino, A cog in the machine worker wins a contest at his workplace. The prize is a week at the estate of the owner of the company. Imagine a Bill Gates style world’s richest man (Oscar Isaac) who is also an inventor bringing in a guest (Domhnall Gleeson) to his private island. Only the host is really a mad scientist conducting an experiment wherein he wants to see if his guest and his sentient robot Ava (Alicia Vikander) will fall in love.

There’s sci-fi and then there’s intelligent sci-fi. Isaac Asimov wrote about the three laws of robotics in his 1942 story Runaround. 1) A robot may not injure a human being or, through inaction, allow a human being to come to harm. 2) A robot must obey the orders given it by human beings, except where such orders would conflict with the First Law. 3) A robot must protect its own existence as long as such protection does not conflict with the First or Second Law.

In the film Ex Machina writer/director Alex Garland throws the rules out the window. “I completely ignored them. It’s a set of self-declared laws. I don’t feel obliged by the court of sci-fi,” says Garland during last month’s SXSW Film Festival to a group of film reporters.” I don’t think Asimov would expect that either because he was a writer.” 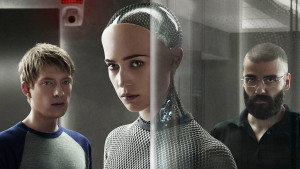 Garland wrote the novel The Beach, which was also made into a movie directed by Danny Boyle. Subsequently Garland wrote the screenplay for Boyle’s Sunshine (2007). Additionally Garland adapted the movies Never Let Me Go (2010, from the novel by Kazuo Ishiguro) and Dredd (2012). While Ex Machina marks his debut as a director Garland is quick to add: “The concept of a first time director is misleading. The problem for me is it presupposes I wasn’t making films before, that you don’t make films until you become a director. I dispute that. I’ve been doing this for years and actually with many of the same people; some of them actors and some of them crew. That’s not a land grab from directors, it’s just a fact that writers, cinematographers, and producers are all filmmakers.”

What makes Ex Machina above average and a cut above a modern effects-laden sci-fier comes from the depth of the interaction between the three principals. “It is essentially a product of drama that comes from conversation. That’s theatrical. Part of the challenge in cinema is something that’s using the theater form but making sure it doesn’t feel like a stage play with cameras,” says Garland. “It’s about finding the cinematic within that, it needs to feel like cinema.”

Isaac, also present, adds “The language, the wit, the condescension, the sardonic humor, that was all in the script. There’s so much that’s not being said. There’s so much doubletalk. People present something that’s not necessarily the truth. Being the hammy actor that I am I was looking for places where I could add more of it.” 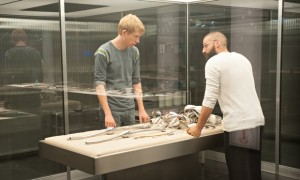 “The current crop of AI related narratives and also public pronunciations of concern, I feel don’t address AI’s direction,” says Garland. “It’s more to do with privacy issues; more of a sense that we have given up something of ourselves to machines.

“We understand less about the machines and the tech companies than they understand about us, and that makes us feel uneasy. I was trying to acknowledge that in the script. A strange thing happened when trying to get this film financed. One of the financiers we showed the script to said ‘this whole thing about tech companies getting information from mobile phones and such is just too ridiculous.’ And I remember thinking so you’re going to buy a story about a thinking and talking robot but not that tech companies are gathering information. And then Snowden came along and blew the lid on that stuff.”

Geoff Barrow (Portishead) and Ben Salisbury provide an electronic soundtrack that gives off a pulsating and living atmosphere. Ex Machina opens in Houston on April 24.