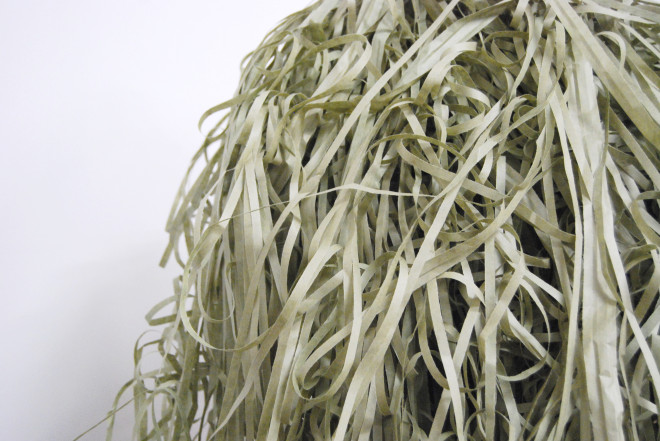 Photo courtesy of the artist and Barbara Davis Gallery

This holiday season, as you brace yourself for those chilly 61-degree Houston winter days by drinking your way from one holiday party to the next, take a moment to soak in the natural man-made beauty of the concrete jungle that reveals itself, as those pesky leaves wither and fall from the trees. Of course, appreciating all that splendor right now might be aided by some of your neighbor’s special eggnog, but if he is out, or has cut you off after what happened last year, take yourself over to Barbara Davis Gallery to check out Troy Stanley’s new exhibition, concrete-spring, opening December 13th.

Stanley has become known for his sculptural installations that involve a level of interactivity, electronics and mechanics that bring objects alive and those of you who made it out to the Texas Contemporary Art Fair would have had a chance to see his well-received installation, Zephyr. Stanley explained to me how his work, “typically explores the space between life and objects. Sometimes I try to make objects have a certain hint of life, and other times I take what is living and turn it into an object. In a way, I’m trying to subvert the viewers preconceived notions of their environments, both natural and man-made.”

To that end, Stanley promises that there will be a few pieces that move or change over the course of the new exhibition, but the process will be in the background. Much of the work in this show reflects Stanley’s upbringing–growing up in a house full of potted plants, macramé plant hangers, crocheted afghans and needlepoint pillows to go with the manicured hedges, pruned trees, and evenly cut grass. Threads of domestic, craft, and the cultivated garden run throughout. A highlight will be some plants made from paper shredders and electrical wire that will, over the course of the month, grow out of control and fill up the front gallery. He also added, “You can still perceive where everything came from and where it is going, and that’s important. In a way, many of the pieces come off more as a continuation or addition to what came before or what comes after. It’s as if everything has already been touched by 1,000 hands over its lifetime, I am merely the 1,001 hand adding to the story.”

Stanley described how, in December, the vibrant greens are traded for muted browns and bare branches, exposing “the lush landscape of concrete fields, empty cement beds, and the man-made functions and form.” To him, “concrete-spring is a paradox of a misguided function and static form. Many of the materials chosen are five times removed from the natural world. Whether it is wood, linen, thread, paper they all at one time where something dynamic and living. I use them as they are, but I try to bring them back to life if only for an instant. I guess the paradox is that I attempt to bring them to life, just to make the viewer realize they were dead all along.”

As a professional button-presser and lever-puller, I am a sucker for anything that moves or is interactive. When I asked Stanley about this aspect of his work and the underlying logic, he replied, “For me movement/interaction is only interesting if it propels a certain idea or expression to new ways of seeing. Really it comes down to context. I did a piece in the past that opened and closed 20 or so drink umbrellas in unison. On paper that is incredibly boring, but in the context of everything else involved in that piece, it shifted a simple open/close movement and turned it into breathing. That shift is what drives the work and really what the work is about, but that is something in between and not on the surface. People need to be part of the work on some level in order for that shift to happen. I think in a way having an object in front of you that is doing something, or did something, makes you treat it more in a presence than you would seeing an image of the same thing. If I can have the same idea come through with just an image, I would just take a picture and save myself a lot of cuts and splinters.”

I for one, happen to think the cuts and splinters are well worth it–with or without the eggnog.