Leon casino, Serious cinema for serious moviegoers. That would be a phrase to describe two exclusive films opening this week – Foxcatcher and Homesman. Both films maintain an earnest dramatic tension even while dealing with shady subjects. In the case of Foxcatcher a senseless murder committed by the scion of one of America’s wealthiest families, and Homesman deals with issues of sadism and masochism in 1850s Nebraska.

The Schultz Brothers, John and Dave both won Olympic medals during the 1984 Olympics. Each was then hired by millionaire John Eleuthére du Pont to become part of his Foxcatcher wrestling team. du Pont also finances the brother’s entry into the 1988 Olympics. Mark Ruffalo and Channing Tatum play the Schultz Brothers and Steve Carell inhabits the du Pont character right down to an aquiline nose that wouldn’t be out of place in a comedy. But Foxcatcher is no laughing matter. Direction by Bennett Miller (Capote, Moneyball) moves at a deliberate calibrated rate that illustrates the relation of the men to money and sport.

Carell gives one of his best dramatic performances. Carell has done justice to other straight non-comic roles like in The Way Way Back or Dan in Real Life, there are a couple of others. But for Foxcatcher it’s as if Carell has dug deep into the head of a real mentally unbalanced psyche. Carell’s du Pont has ulterior motives that he hides behind his wealth, a love of birds and groping men on the wresting court. Channing is easier to manipulate and easier to send into a spiral of self-doubt, but Ruffalo holds out against du Pont at first, eventually moving onto the du Pont Foxcatcher estate with his family. When the wrestling team chokes during the 1988 Olympics it sends du Pont over the edge with grim results for the Schultz Brothers. 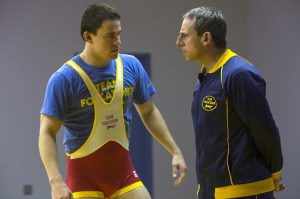 Homesman marks the sophomore feature directorial turn from Tommy Lee Jones and he shows the influence of every great director he’s ever worked with. Nebraska in the mid-19th century is a flat bleak wasteland captured wonderfully by the camera work of Rodrigo Prieto.

Hillary Swank plays a prairie woman who lives alone on her farm and has as much acumen and skill as any man in the county. The times being what they are Swank must overcome the usual bit of discrimination accorded her sex. The local minister (John Lithgow) enlists her to drive a wagon containing three women who’ve gone crazy on a weeks long journey to another state where they are to be housed in a kind of sanitarium run by other members of the clergy. The reason the women have gone bonkers is the way they are treated by their husbands. They are either catatonic or prone to acts of self-mutilation.

Rather than go the trip alone Swank enlists George Briggs (Jones) to ride shotgun. Briggs doesn’t have much choice as he is basically saved from the hangman’s noose by Swank. Every character they meet from Indians to other suspicious cowboys in the wilderness are desperate and wicked characters. A few events unwind that drastically propel the plot in unexpected directions. Grace Gummer, Miranda Otto and Sonja Richter are the femme passengers, all of them excellent in portraying their loss of identity. Supporting turns from Tim Blake Nelson, James Spader, and Meryl Streep, among others, are spot on. Overall Homesman manages to be a very uplifting tale of survival despite its constant bleak landscape.

Foxcatcher is booked at the Sundance Cinemas Houston and Homesman is unwinding at the River Oaks Three.