Leon casino, Every move, every breath and every shot that we associate with current indie cinema has all been done before. True enough, 60 years ago there had never been a rack focus shot in movies. But charming and witty dialogue, deadpan humor and genre twisting plots are as old as cinema itself.

So if someone goes to Wes Anderson or Richard Linklater films because of their alternative take on mainstream entertainment then surely that same someone is also conversant in the filmography of Hal Hartley.

Hartley created his own indie movement in American cinema with The Unbelievable Truth (1989) and Trust (1990), which introduced performers like Adrienne Shelly, Martin Donovan, Karen Sillas and Robert Burke. Hartley’s other ‘90s era films include Simple Men, Flirt, and Henry Fool (1998). The latter film resulted in a sequel, Fay Grim (2006) and now Hartley has completed the trilogy of these characters with Ned Rifle.

Ned Rifle continues the story of the Grim family and their interaction with Henry Fool. Hartley uses all of the same actors – Parker Posey, James Urbaniak, Liam Aiken, Thomas Jay Ryan – who originally played the characters in the previous films while adding a couple of his regulars like Donovan, Sillas and Burke, as well as a new femme fatale played by Aubrey Plaza.

Free Press Houston spoke to Hartley by phone about Ned Rifle and his other films the week before SXSW. “I remember back in 1992 I shot my film Simple Men in Houston. Traveling and scouting around the state I was surprised how cold it could get in the winter months,” says Hartley. On specifically lensing the film in Houston Hartley replies, “It was a union thing. Even though I was making these tiny little movies, I had become notorious to the local unions in New York. I just didn’t have enough money to shoot the film and unionize it. Texas at that time, and probably still is, was a right to work state.”

In contrast, Hartley shot Ned Rifle in New York on an even lower budget than some of his ‘90s films without any union hassle. “I’m not as notorious anymore,” laughs Hartley. 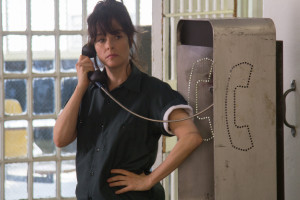 In a sense, Hartley has done what Linklater did with his Before Sunrise trilogy: allowed us to watch characters grow over the period of a couple of decades. “It’s a coincidence,” says Hartley about watching the characters in the Henry Fool trilogy age over a generation much the same way that they do in Linklater’s film. (The most recent Linklater film being the best example, Boyhood, which was shot over a continuous 12-year span with the same actors.) “But maybe it shouldn’t be. Richard’s been making similar stories with the same characters for some time.”

The money for Ned Rifle was raised with a Kickstarter campaign. The budget was $350,000. “I spent about a year-and-a-half trying to finance the film through traditional ways, and then I just started to feel bad about that. The business was changing, and I wanted to be ahead of that curve,” says Hartley. “In the ‘90s and even the 2000s you attach movie stars at some level to your project then you go out and get pre-sales estimates, then you make pre-sale deals. That’s not viable anymore.

“And so I did the math, and saw I could supply the obligations that doing a crowd sourced project entails. Making product for the people who pre-buy it,” says Hartley. “It’s a matter of sustaining the energy. It takes a lot of energy.”

On assembling the same actors over the years Hartley notes: “It wasn’t that difficult this time. On Fay Grim it was because Parker had a lot of work at that time. She was totally into it but had a lot of movies and television she was doing at the time so we had to make it fit. In the end we got the band back together.” 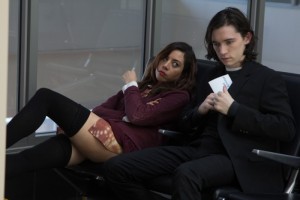 On casting Plaza, Hartley was not familiar with her previous roles. “Her agents were the same agents that represent Parker, and once she was on board they said ‘Can we help you with any other characters?’” Hartley then saw Safety Not Guaranteed. “She did something in that film that had charm, the right attitude. Definitely a blasé kind of behavior, but there was more than that. She has skills and ambition in her performance.”

Hartley takes issue with calling the humor in his films deadpan. “It’s not a term I use. I try to avoid obvious interpretations of text. That can lead to characters that you see thinking rather than acting out. After thirty years of making films I know what I want.”

Ned Rifle had its US debut at last months’ SXSW after premiering at film festivals abroad (Toronto, Berlin). The plot finds Fay, Ned’s mom, in prison serving a life sentence for terrorism. Ned now grown up after being raised by a religiously conservative family vows to kill his dad, Henry Fool.

Hartley also composed the music for his latest film. In earlier films Hartley used a nom de plume for his musical credit, which was, perhaps not too odd, Ned Rifle.

After a brief theatrical release, Ned Rifle is currently available via VOD, and also through Hartley’s website (halhartley.com).