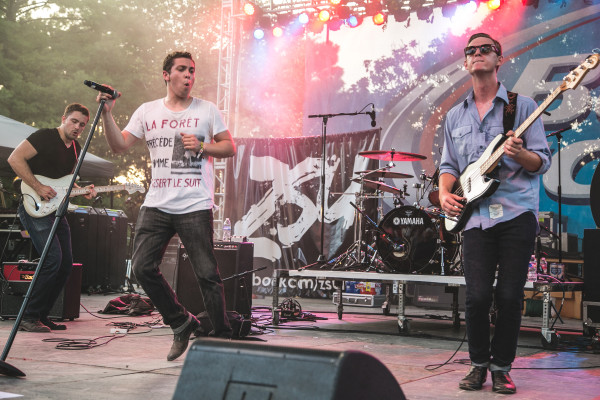 Local bands come and go without much fanfare, but it’s always a treat to see an artist with a lot of energy return to the stage after a long absence. Pre-college, Houston’s Alex Dugan fronted the Transco Empire which played for a short time around Houston. They had big ambitions, but ended up breaking up. Now Dugan has returned with a new band called ZSU, and is playing a rootsy yet modern flavor of rock which sounds like an amalgamation of U2, The Black Crowes, and maybe a dash of Tom Petty. They played Houston two months ago at Fitzgerald’s and plan to return sometime in the fall.

What does ZSU stand for? Why didn’t you spell it out?

As you can imagine, selecting a name for a band is an extremely personal process. For us, it was collaborative – the goal of the band was to have something that was unique, memorable, and that resonates with our target audience. We landed on the name ZSU (pronounced Zoo) and it has served us well. It has become our identity.

Do you still play with people from your first Houston band, the Transco Empire?

As all musicians do, I have grown immensely over the course of my career in music. I feel excited about where ZSU is at. We are an extremely dedicated band – and are striving to create music without any preconceived notions, something that I feel is truly unique. Hopefully the crowds we play for feel that and keep coming back for more.

What is the biggest band you’ve opened for so far?

Los Lonely Boys, we opened for their show in Austin this past spring. The band had a great time—it was an awesome experience. The energy of the crowd that night was crazy!

Who are your main vocal influences? Your vocals in Transco and ZSU are not the norm for rock these days.

My greatest vocal influences are Bono and Rod Stewart.

If ZSU covered an entire album live, Phish-style (fuck Phish, by the way), what would it be and why?

ZSU as a band is extremely collaborative. We all have different musical influences. That’s part of what I love about the group; we have a lot of ideas and come together as a collective to create something different.

You guys have a very guitar-heavy sound, is that a rarity nowadays with all the EDM and hip hop that’s making the rounds?

I wouldn’t consider it a rarity, if you look in the right places. However, the best thing we can do is make music we love, and hope that people feel the same way. Even though the current culture has shifted, I feel that our music has the ability to cross those barriers and hit a wide range of people.

What is it like being a band currently based out of Austin, given that its a city flooded with other musicians and bands?

It’s challenging, but it’s a challenge that we are up for and very excited by. This town is competitive, but in a good way. We’ve had nights where we play for 300 people, and a couple weeks later play to a room of five. It’s just part of the business, a business that we are very committed to and very excited to be a part of.

Who do you guys count as influences for your sound overall?

Collectively we all have a lot of different influences, and I don’t think there’s really one specific one, which is more awesome. We jam out to the Rolling Stones, but at the same time, I still get hysterical Snapchats from [fellow band member] David, singing One Direction songs.