Ant-Man continues the Marvel juggernaut. Scenes where Paul Rudd goes into a sub-atomic world seem like a nod to the end sequence from 2001. You may learn a bit about ants that you didn’t realize. Likewise in Trainwreck you will learn more than you wanted to know about lead actress and scriptwriter Amy Schumer.

Hands down, Trainwreck is a very funny film. When I saw the film at SXSW earlier this year the audience was laughing so hard and often that I missed many of the punch lines. That’s okay because Trainwreck is a film I would see more than once. Ant-Man was good once, and we can expect to see Rudd return in Captain America: Civil War (May 6, 2016). 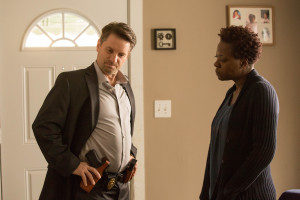 On a more personal note are a couple of exclusive engagements that do justice to each film’s uniqueness. Lila & Eve (at the Sundance Cinemas Houston) does not end the way it begins. Viola Davis has joined a support group after her teen son was gunned down in a drug related murder. At this point it seems like L&E wants to test your patience and pretend to be, thematically not unlike a cable movie, about the arc of her grief. A feel-good movie about feelings and emotions.

Before the first reel ends it’s clear Lila & Eve would take more pleasure in becoming a vigilante movie with Jennifer Lopez as a distaff Charles Bronson. Lopez, also a member of the support group, goads Davis into tracking down her son’s killer. Along the way they start executing drug dealers and suppliers on their way to the top of the death food chain. Some rather well timed action sequences highlight their amateur assassin sassy mission.

Shea Whigham plays a detective who notices a pattern to the murders that leads him to suspect the two women. No money, drugs or expensive watches are ever missing from the victims, just their cell phones. Lila & Eve balances the ratio of its exploitation atmosphere with some moral choices the women have to make.

Director Bill Condon finds the soul of a famous literary character in Mr. Holmes (at the River Oaks Three). Ian McKellen plays a withered version of the famed detective living out the end of his life at a country home with a caretaker (Laura Linney) and her young son (Milo Parker). Events unfold in Holmes’ head in the form of memory and fantasy. For instance regarding the latter, one sequence takes place in the post-atomic waste of Hiroshima.

Parker takes a secretive delight in listening to Holmes tales against the wishes of his mother. There are no crimes that take center stage. Condon wants to play with atmosphere and character more than he wants to make a mainstream movie. (Some of Condon’s bigger titles are Dreamgirls or Breaking Dawn – Part 1 & 2.) There are hints at the relation of bees to humans or the effects of exotic organic tinctures.

Mr. Holmes demands an art house mentality. The film achieves whatever goals it set mainly because McKellen brings the goods to the table with his wistful performance of a man at the end of his life.

Bernie Sanders in Houston Sunday, While Clinton Does a Weak Imitation