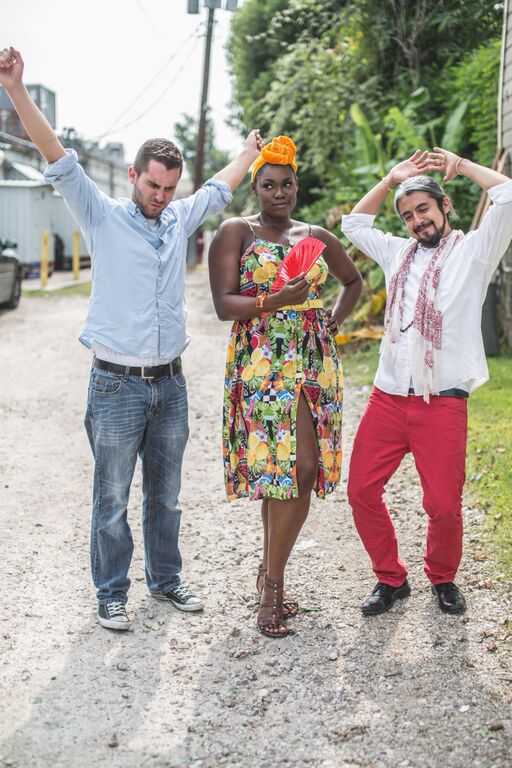 The one thing about the Houston music scene, is that there’s more than enough room for acts of pretty much every genre.  There aren’t too many times when you hear an act though, who has crossed so many together, that they have created their own thing.  However, with Houston three piece Moji, the way in which the band mingles R&B, jazz, soul, and South American rhythms generates an overall sound that stands on its own.  When Moji told me that the EP, titled “Desert Son” that I watched being recorded was finished, I of course jumped at the chance to listen to an early copy.  Recorded at Houston’s famed Sugar Hill and overseen by Josh Applebee, what I walked away with was the feeling that acts with their own sound come to it on their own terms.  And in the case of Moji, those terms were magical and uncompromising.  The route the three take with the drum rhythms that David Garcia employs, the various guitar structures that Troy Craegh creates, and the sheer vocal prowess that Moji herself makes use of is something that while you can’t pigeonhole; is completely fresh and inventive.

The three piece doesn’t waste time in starting things off in their own special way.  Anyone who’s seen the band live can attest to this completely different approach to music, which is ever present on the opening and title track, “Desert Son.”  Thunderous drums that kick things off from Garcia as the group begins the song, Moji’s sweet yet thick vocals permeate from the track as it sways between an uptempo to a slower bridge.  Troy’s guitar acts as the go between on the song while the vocals and the drums do their own thing.  The jazz structure of the song reaches a climax where all three are at the same tempo causing a build that feels like it may never peak.  There’s a certain tribal nature to the song’s build that Moji cuts through like a hot knife to butter with vocals that seem otherworldly.  When the song draws to its end, just soft vocals that seem to sing you to sleep are met with gentle guitar, and thus making the song something completely different than anything you’ve heard before.  The same could be said about the almost Barney Kessel type guitar that opens the second song, “Constellations.”  Craegh takes the guitar for a walk while Garcia keeps time in the background.  These spacey notes are seasoned with Moji’s emotionally tense vocals, that give the song a completely exotic feel.

Around the third song, “I.O.U.” I would guess that you would hear the influences of the likes acts like Herb Alpert and Sergio Mendes have on the band.  That’s a good thing, as the samba meets R&B sounds that emanate from the group haven’t existed in popular music in such a long time, that they feel fresh and new.  The way the band finds a way to create these notes makes it all their own. There’s the feel of being in Rio during Carnival with Nina Simone as the grand marshall to the tune, which is such a beautiful place for any song to take you.  Though the third song is a stand out, the same could be said on the fourth song, “Ceasefire.”  The first track I heard from the band, the song sounds heavenly on this release, where the emotion of Moji’s voice mixed with Garcia’s work behind the kit & Craegh’s grumbled guitar make a sound that make you feel like no other act could create.  Added to this version is a breakdown jam that has more percussive work and spacey guitar than I recall.  However, it works and gives the song a whole new life while Moji sings to the stars while she takes you to a whole new universe.

The three piece closes the five songs off with the more R&B inspired vibe of “Free.”  The way in which the guitar is played gives the song an almost basslike quality before it gets utilized more like a guitar.  The pop of the drums are in the mix alongside Moji’s vocals that sway in and out like a bird in flight.  With a moment in the track where things feel like a structured jam, it ends before you can blink and bring the release to a close.  It almost ends too quickly, but one could argue that the band believes more in the idea of “leaving the listener wanting more;” in that the way the song closes things, it at least feels proper.

Though the EP won’t be available to the general public for a couple of weeks, the band has decided to offer physical copies up to all who attend this year’s Free Press Summer Fest.  You can grab your own copy as well as catch this mesmerizing act when they perform Sunday June 7th at noon on the Mars stage at the festival.  And from the sound of this release, you will have plenty of chances to watch them on stages even larger in the future.

My Wingman | Kickin the Bucket [Hat]