The Babadook gets a limited theatrical showing in Houston this weekend in advance of its April 14 Blu-ray (IFC Midnight, Scream Factory/April 14) debut. The Babadook will screen April 10 (7:30 pm.) & 11 (7 pm.) at the Museum of Fine Arts, Houston.

The Babadook is an Australian horror film that doesn’t feel foreign. Certainly The Babadook unwinds more like a psychological thriller, slowly showing its cards until you realize it is a horror film. (Think Don’t Look Now or The Exorcist, both perhaps not oddly from 1973. You can even conjure up the atmosphere of Repulsion.)

The Babadook is a low budget film that doesn’t look low budget, so clever are the images and editing and angles.  It’s obvious even in this her first feature that director Jennifer Kent understands pacing, camera set-ups and structure to the extent that she’s turned out a movie classic in her first at bat.

The Babadook revolves around two main characters, a widower (Essie Davis) and her hysterical young son (Noah Wiseman). The first half of the movie might throw some people off since Wiseman spends most of his screen time screaming and acting crazy, which causes constant torment for his mother. Wiseman constantly kicks the seats of the car whenever it’s in motion; he also pushes his cousin out of the tree house breaking her nose in two places. Wiseman must have hyperventilated just from all the hard breathing his character has to portray. 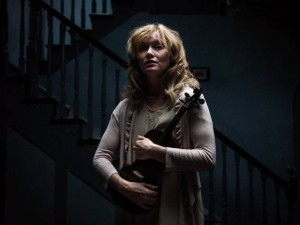 Davis reveals a woman slowly going mad from having to deal with the public and private behavior of her son. He creeps silently into her room at night while she’s feeling herself up, and then scares the hell out of her. She starts to doubt her own sanity as their behavior patterns slowly switch.

Then there is a mysterious children’s book called The Babadook that seems to portend shadowy events that lurk in the subconscious. Davis even tears up the book but it appears on the front steps sewn together the next day, it’s arrival preceded by loud unexplained banging sounds.

The Blu-ray release features a slew of extras including over an hour of actor interviews. Other featurettes include deleted scenes, on-set B-roll, and how some of the stunts were shot. Also enclosed is Kent’s 10-minute short Monster, which was the seed of Babadook. The special edition includes a slip case that folds out with a Babadook pop-up.

The Babadook has a psychological otherness that has made it an instant cult classic upon its domestic release late last year. Don’t miss this chance to see The Babadook with an audience in an above average theatrical setting.