As a struggling actor in New York City, Ryan Serhant found that he needed real money to live in the big city. “I was doing free theater,” says Serhant in a phone conversation with Free Press Houston. Serhant introduces the film While We’re Young tonight (April 10) at the River Oaks Three at the 7:15 and 8 pm. screenings.

Serhant got into the realtor business, which led to the reality business. “I attended about 45 hours of classes. There are two tests you have to take to get licensed in New York State,” says Serhant. “I remember the day I got my license, September 15, 2008, because that’s the day Lehman Brothers went bankrupt.” [It’s also a couple of days after Hurricane Ike ripped through Galveston and Houston.] Serhant has family in Houston, and grew up here, and also on Long Island and outside Boston.

Once Serhant was secure in his job his boss told him about an audition for a reality show centered on high dollar property. It took months, and many call backs, then Serhant found himself one of the stars of cable channel Bravo’s Million Dollar Listing NY. 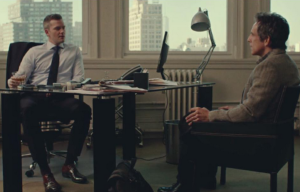 In a roundabout way this led to his supporting role as Hedge Fund Dave in While We’re Young.

Hedge Fund Dave listens as Ben Stiller makes a pitch for completion funding of his character’s documentary. Only the entire time Dave is looking at his computer or texting on his cell phone. “It was such a switch being on a movie set as opposed to a reality show,” says Serhant. “We shot all day for the scene where I suggest we go to Afghanistan. Noah had me saying it all kinds of different ways. I had no voice by the end of the day.”

Million Dollar Listing NY begins its fourth television season next week. While We’re Young is playing at the River Oaks Three and at the Cinemark at Market Street Theater in The Woodlands.