Leon casino, Earlier this week, hundreds of Texans descended on the Capitol in Austin to talk to lawmakers about proposed legislation that would have a profound impact on the lives of  lesbian, gay, bisexual, and transgender (LGBT) Texans.

The Freedom Advocacy Day was organized by Equality Texas, the Texas Freedom Network, and the Human Rights Campaign. A rally was held before the legislative visits, where activists held signs saying, “Don’t Indiana my Texas,” and “Equality is Good for Business.” 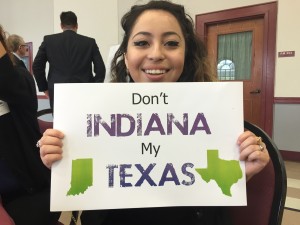 Recently, the state of Indiana has been all over national news for its controversial Religious Freedom Restoration Act (RFRA) and the ensuing backlash from businesses like Yelp, the NCAA, and other state governments. But what hasn’t been as widely acknowledged are the identical, if not more dangerous bills being discussed at the Texas Capitol this legislative session. Texas lawmakers are currently considering more than 20 bills that would allow discrimination-even criminal prosecution-against LGBT Texans.

Magge Nuñez, a psychology major at the University of Houston Downtown, went to Austin to speak out against the legislation.

“I decided to lobby because I wanted to do something against these horrible and inhumane bills. I feel like it is up to us to change this situation, for ourselves and future generations,” said Ms. Nuñoz. “People should be more aware about the issues because we have the voice and power to change things.”

Ms. Nuñoz was particularly concerned about the proposed legislation that would amend the Texas Religious Freedom Restoration Act (RFRA), which was passed in 1999 with bipartisan support to protect the religious freedoms of all Texans, and make it strikingly similar to the one passed in Indiana. Three Republican legislators have authored bills that would weaken language in the Texas RFRA, making it so vague that it could open the door for businesses and employers to legally discriminate against anyone on religious grounds.

Other bills specifically target the transgender community. Lou Weaver, a Houstonian and transgender advocate, went to Austin to put a face to these issues.

“So many people do not realize that they have met a trans person that I wanted to be there to personally say hello and to share the impact that the anti-LGBT bills, especially the bathroom bills, would have on my community.”

These bathroom bills, proposed by Rep. Debbie Riddle (R-Tomball), would allow for the criminal prosecution of transgender individuals who use the public restroom that matches their gender identity and expression, but not the gender marker on their state-issued ID, such as a driver’s license. If these bills pass, simply entering a bathroom and doing one’s business, just like everyone else, would give employers and business owners a license to discriminate against a transgender person.

While many people were speaking out against harmful legislation, others attended the Freedom Advocacy Day to speak in favor of bills that would amend Texas laws to be more inclusive.

“The Romeo and Juliet law protects high schoolers from receiving sex offender charges when they engage in consensual sexual relationships with their peers; however, as it is written the law only protects couples ‘of the opposite sex,'” leaving same sex couples in danger of prosecution.

Mr. Lee went on to explain, “If a healthcare provider discovers an adolescent is sexually active with a same sex partner, they will be obligated to report this information to the proper authorities. From a health care provider’s perspective we believe this law discourages patients from disclosing personal information that could prevent proper diagnosis and therefore interferes with their health.”

More than 30 bills have been filed this session by lawmakers that would protect LGBT Texans and their families from discrimination. These bills would expand non-discrimination policies across the state and ensure all people are treated fairly and equally under the law.

As Representative Mary González (D-Clint) said to everyone at the rally, “We cannot let homophobia, and heterosexism, and transphobia exist in our state, and I’m glad that you’re here to say that we will not allow these [bad] bills to pass.”