The Birth of a Bully 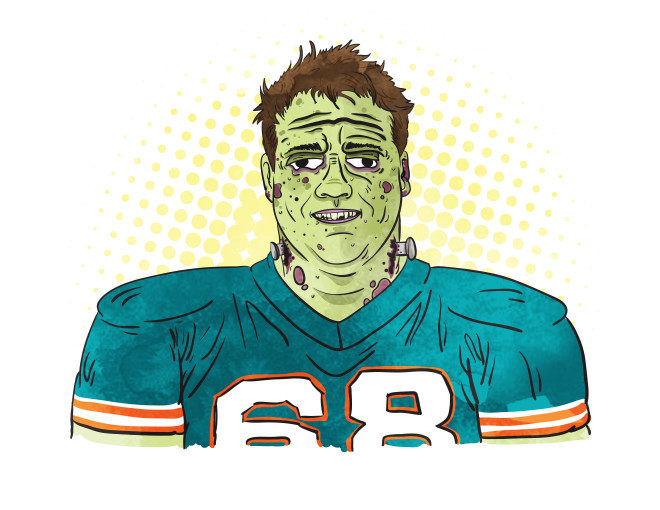 There are few things worse than ‘The Jackass” in your life.

It might be a co-worker. Or a roommate. A relative. Hell, even a friend. No matter who it is, “Jackasses” all hold one thing in common. Not only are they the absolute WORST, they’re 100% oblivious to that fact.

For the Miami Dolphins, guard Richie Incognito is that “Jackass.” In case you don’t know who old Richie is, here’s his rapsheet story in a nutshell:

And that’s just the tip of the iceberg. Incognito’s douchey nature reached an all-time high weeks ago when he allegedly bullied teammate Jonathan Martin off the team. Racism, threats against Martin’s family and even death threats toward Martin were all key ingredients for Incognito’s recipe of “How to be a Turd”.

The worst part? Just like that “Jackass” you know, Incognito has zero clue what a waste of space he is. He rationalized his behavior saying he’s like a “big brother” to Martin. And in a grievance he filed against the NFL, Richie had the gall to claim that the Dolphins: “failed to properly advise or warn [Richie] that joking behavior amongst teammates or the use of vulgar or profane language amongst teammates, whether in-season or during the offseason, could subject him to disciplinary action.”

Hey, Dick Richard. I could be wrong, but I’m pretty sure that short tempers, alleged assaults, starting fights, alleged sexual harassment, racism, promises of violence and death threats are frowned upon at most workplaces. Do the Dolphins really need to explain “common sense” to a 30-year old man?

Unlike the Rams (who fired his ass), the Dolphins never had the stones to hold Incognito accountable for his crap. No one in the front office. No coaches. And no players. In doing nothing, they let this temperamental loon believe that everything he did was A-OK. Whether it was getting into fights on the field, in hotels, threatening violence or dropping slurs, Incognito thought he was untouchable. And his mentality carried over to the rest of that locker room.

Now Miami is trying to save face. Too little. Too late.

So what do we learn from the fall of Richie Incognito? This: Just like Jonathan Martin, you don’t have to deal with a “Jackass” either (though you can definitely handle it better than sucking it up for over a year and THEN deciding to act on it).

You know the one I’m talking about. Your co-worker. Your roommate. Your relative. Or your “friend”. If you’re fed up with their insufferably obnoxious ways, YOU can actually stop them. Here’s how.

Step One: The toughest one. Take them aside, and verbally blow them away. Just lay into them, and be honest.

“Hey bro, I’ve been thinking on it…and I’ve got to say, you quite literally are the worst human being on the planet.”

Step Two: Keep going. Explain why. Then wrap things up like this,

“…And I have zero desire to interact with you anymore. TOODLES!”

Step Three: Put on your shades, Horatio Caine style, and walk off into the sunset.

Step Five: Bring your friends in on the fun for full effect!

Worst case scenario? “Jackass” never talks to you again. And let’s be honest, you probably won’t miss them one bit after a week or two.

But the best case? After being ignored long enough, this person crawls back to you a changed individual. Gone is the douchery. Gone are the annoying habits. And in your face is a human you’ve broken like a wild horse. You can even give them a carrot if you like.

Bottom line: You can keep the Richie Incognitos of the world out of your life. Just make sure you don’t stand idly by.