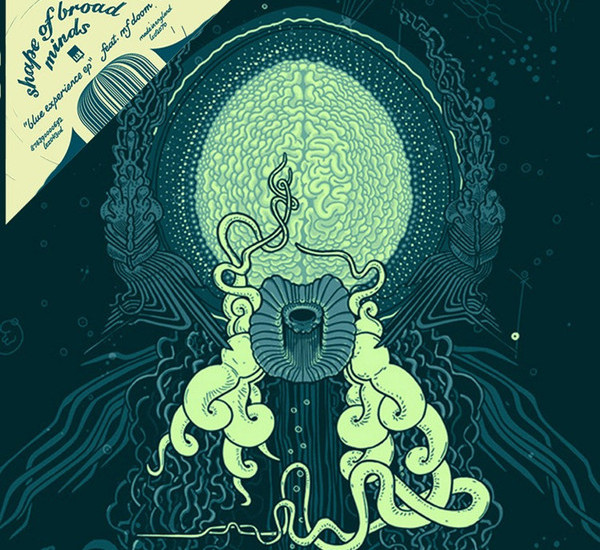 How many times have you heard an album, realized where it came from and when it was released, and then freaked out when you noticed  that you somehow missed it?  For me, it happens more than I’d like to admit; and it pains me to say that sometimes I just miss things.  However, seven years ago, one of the best hip hop albums I’ve heard in my life dropped and no one in this town wrote a word about it.  Usually, that’s not cause for alarm.  But when you realize that it contained one Houstonian born and raised alongside another Houston transplant; it blows your mind.  I mean, it blows my mind that I don’t even remember what I was listening to in 2007; and more so that I wasn’t jamming Shape of Broad Minds’ “Craft of The Lost Art.”  There’s so much happening on this record, that the fact that MF Doom appears on it, doesn’t even crack the surface of what’s going on within.

I’m not going to pretend that I knew about this record when it was released, because I didn’t.  But, when I sat at Cafe Brasil next to Jawwaad Taylor, his tales of all he’d accomplished as a Houston born musician blew me away.  This came about while everyone at the table discussed the genius of B L A C K I E, and how obtuse the press in this town can be.  The phrase, “we got Doom and Lil’ Sci and no one here noticed,” stood out like a gun to the face when Taylor announced it in casual conversation.  My mind immediately thought, “Doom, like MF Doom?”  It was one in the same.  How could a guy who’s made some of my favorite hip hop make an appearance on a Houston based album and I had no idea of its existence?  I guess the idea of “Welcome to Houston” immediately came to my mind.  That idea that our past paints the picture of a city that’s done very little to support our own scene of diverse and immensely talented artists.  After inquiring about the album, I decided it was time to give the album the love our city never gave it when it was released.

It turns out, that the album was made by Taylor alongside Jneiro Jarel, also known under the names Dr Who Dat?, JJ Tron, and Panama Blaque to name a few. Jneiro is no stranger to making great music nor is he a stranger to insane collaborations.  Where Jawwaad was born in Houston and grew up in Acreage Homes, Jneiro was born in Brooklyn and lived in Houston at one point.  Jneiro has done projects like JJ DOOM and Willie Isz; and he’s collaborated with everyone from Damon Albarn of Blur/Gorillaz fame to Massive Attack and TV On The Radio.  The scope of what became Shape of Broad Minds is what happens when several factors occur at once.  Factors like artists getting to make art together, insanely talented artists getting to vibe off one another, and when those with a shared vision get on the same page.  The mix of these two producers, musicians, and lyricists in the same room is different from the hype machine stuff you hear today.  This is a mathematically beautiful approach of intertwined sound landscapes mixed with incredible rhymes that drop so naturally that it makes you question everything you’ve heard before and after.

I’ve contended for years, that a perfect cappuccino is something that I’ll only experience one out of every five times I order one.  This album is that perfect cappuccino that exists only in my dreams, and it somehow is as perfect in those four rogue orders as the one you felt stood alone in perfection.  There’s something about a record that has so much diversity in it’s approach, that it feels timeless alongside felling futuristic.  The opening track, “Gorilla Mash” has one of the best hook laced guitar samples I’ve ever heard that’s played underneath opening shout outs.  It’s simple, yet complex, and it’s the perfect way to gauge the flow of the rest of the album.  The next track, “Light Years Away” rolls in as smooth as a pick up line and almost immediately drops rhymes that are coupled with a cut beat and a horn sample that have the vibe of NYC all over the track.  That slides into the ultra funky and clap based beat of “Let’s Go.”  The continuous vibe of some kind of Parliament trippiness is only exemplified by the prowess of MF DOOM.  It’s so hook heavy and simplistic that if someone said that it was crafted by Danger Mouse, you’d believe them.  The simplicity and sheer force doesn’t stop when it grooves into the fourth track, “Changes.”  The backing vocals that are utilized as a form of instrument are pure genius, while the use of slower rhyme flow is something that feels like Q Tip would put his name on.

By the time you’ve reached the ninth track, “It Live On,”  you should have already had your mind blown,  The fact that the track features Count Bass D is not what you notice.  The fact that the groove has trippy bursts of theremin throughout, that you quickly realize that no one has done this type of stuff before; and very few have since.  The tenth track, “So Much” uses the style of Lil Sci with accurate precision, while duo vocals make the background up peppered with cut synths.  It’s just a little insane, just a little crazy, that all this creativity is happening in the same song.  The way that the next song, “Buzz Around Town” rolls in with scat-like beats and snaps, adds a completely different element to what’s already an insanely creative album.  And as soon as it gets going….it’s over.  However, on the twelfth song, “They Don’t Know,” you get more and more diversity.  There are piano runs and jazz drums that keep the rhythm flowing atop the lyricism of the duo match with those of Stacy Epps.

If for some reason you felt like I couldn’t tell you more, there’s literally a jazz song with “It Ain’t Dead,” a distorted vocal opening on the stellar “Beast From Da East,” and South American vibes on the Tom Ze sounding, “Viberian Sun.”  There’s so much happening on this release, that by the time you reach the simplistic approach of “Stiff Robots and Drunken Horses,” you at least hear where Kanye got the idea for his “Runaway” opening.  The smooth R&B flow of “Solo” that features Deborah Jordan, just adds to the complexities of the album, and showcases how deep these guys got on this album.  By the final track, the almost Kool & The Gang sounding “1 2 C” complete with Ian Curtis auto tuned vocals; you’ve hopefully realized that these guys have melded the beauty of everything before them, with a simplistic and easy approach that leaves you with the idea that you have to hear the album again and again.

There are so many things that occur on this record, so many things that hadn’t existed before alongside utilizations of instruments and style that you almost never hear nowadays.  In a mix of Digable Planets meets A Tribe Called Quest, if the album was overseen by Sly Stone; you can’t walk away without jamming almost every song over and over.  There are times where you think of J Dilla, but in the end, it’s still pretty original and definitely something to jam at high levels.  It’s a shame that no one in town picked up this album when it was released, because it shies away from the “dirty South” vibe our city’s hip hop has become known for.  The simplistic nature of diverse sounds on this album make it a must own release, which can still be purchased here.  In a perfect world, the next time someone drops something as great as “Craft of the Lost Art,” hopefully someone in Houston will give it the praise it deserves.

2 Responses to You Might Have Missed: Shape of Broad Minds