Oh Say Can You Cici’s?

Stepping out of the car a soft breeze brushes my face. It whispers to me, “Alvaro, did you know that in the 16th century, buffets were used to show off your riches?” I stop, and completely unbothered by having just been spoken to by the wind, I think, “That makes sense. You have a party, and instead of picking peoples meals and quantities for them, you let them pick what and how much they want to eat, plus, they get to see all the fancy plates and platters that you have.” A car honks at me and I realize that I’ve been standing in the middle of the parking lot just talking to myself.

At last, my destination: Cici’s Pizza. I feel right at home from the moment I open the door, as everyone who is working there smiles and greets me with a “Hi! Welcome to Cici’s!”

Cici’s, if you have never been, is very imposing on the senses (I mean that in the best possible way, by the way). The moment you walk in you will be greeted with warm smiles and a “Hi! Welcome to Cici’s!” Once inside the first things you will notice are the smell of pizza and the colors of the store. Cici’s Pizza is essentially a pizza factory, they are continuously putting out a variety of different pizzas. Unlike most buffets, and most factories for that matter, at Cici’s you can personalize the pizza you want made; even if you want pineapples and mushrooms on your pizza, these nice people won’t judge you and will make you that pizza anyway. 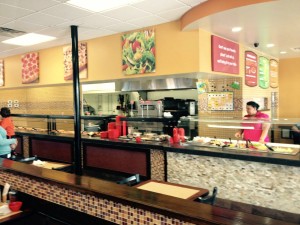 But this place is unique not just because of its food, but because you unknowingly are in a pizza. As stated above, one of the first things to notice when walking into the restaurant is the colors they use. There is no shading, every color is its true self. Upon paying close attention, I can’t help but realize that they picked the colors because whoever designed the restaurant was trying to get us to feel like we are pizza. The pepperoni red, the spinach green, the macaroni-and-cheese yellow (Cici’s Pizza is world famous for their mac-n-cheese pizza), the chairs are olive black, the walls are a beige reminiscent of a pizza crust…Every color was picked to make us feel like we are the food.

Food, its production, and the aesthetics of the restaurant aren’t the only things that make going to Cici’s an experience though; the Cici’s soundtrack is also plays a crucial role. Let me be clear, when I say soundtrack I am not just talking about the Twilight CD we all have in our cars, not in this case at least; I’m talking about the sounds that Cici’s Pizza offers us during every visit. Beginning from the “Hi! Welcome to Cici’s” to the sound of the artists, err, kitchen staff, shouting out what pizza they just put out on the line, to the sound of children having fun, families laughing, and of course the radio station. The station used varies from store to store, but I like this one because of its ‘adult contemporary’ station.

I’m jamming and chewing to Chicago, The Police, The BeeGees, and of course Elton John. One thing that is for sure as to the different radio station that the different Cici’s use is that they are all amazing. I’ve been to a Cici’s that had hip-hop, a couple that have pop, some that have classic rock. Every Cici’s I’ve ever been to has had the perfect station to relax and soothe its patrons. It may seem like the magic of Cici’s lies on the ambiance, and while that definitely does greatly increase the pleasure factor, Cici’s is more than just a pretty face.

All too often, when people try to tell me that Cici’s Pizza is not good pizza, my answer is simple: I just laugh at them. 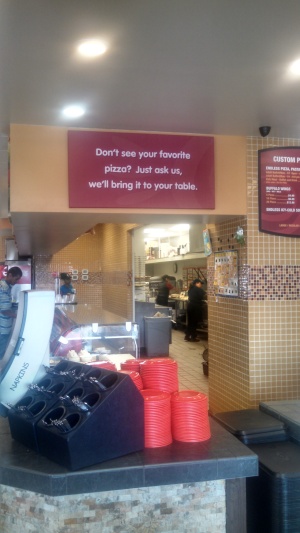 Cici’s Pizza is by far the best pizza that six dollars-something can get you. It has endless possibilities of different pizzas to eat, and if you ask them to make you the wildest pizza from your craziest dreams, they will oblige. And that’s where the trick is, when you order pizzas made for your personal consumption, they top the pizzas better, use slightly, fresher ingredients, cook it the way you want it (if you like your pizzas crispy or a bit on the raw side), in other words, they make your personal pizzas with much more love. They also have what I consider to be the best type of pizza — thin crust.

Another “little trick” to Cici’s is never eating the crust. Not that the crust is bad, but it’s an all-you-can-eat buffet — to fill up on bread is just plain silly. Also, if you’re trying to be a bit on the healthier side, their salad bar is surprisingly good. They use better veggies in their salad bars than some Whole Foods.

Once the feast is over comes dessert, and let me tell you this, their dessert pizza is actually god’s private recipe. Don’t believe me? Just go and try it; you will see for yourself.

After sitting in a booth eating mountains and mountains of pizza for about three hours, I finally am done with my Cici’s expedition. Sludgingly I get up one last time and begin to make my way to the door. I ate so much that I am high, that soundtrack I love so much is now nothing more than a hum, I can no longer even look at the buffet, my knees buckle under me trying not to give way with every step I take, everyone stares at me as I waddle to the door with a huge grin of satisfaction on my face.

I open the door and before I set a foot outside I hear, “Bye! Thank you for coming!”