Far From the Madding Crowd

Leon casino, Pure romantic storytelling just gushes off the screen in Far From the Madding Crowd. Thomas Hardy’s 19th century literary classic gets a superb cinematic treatment in this version that stars Carey Mulligan as the femme, with Thomas Vinterberg directing.

Mulligan plays Bathsheba Everdene, and independent woman of means who runs a farm she’s inherited. Competing for her affections are three men: the guy who owns the farm next door, wealthy and wise enough to know the boundaries of their property and personal space (Michael Sheen); the stoic yet studly sheep farmer who works for Mulligan, and who just lost his entire herd when one of his sheepdog’s in a rather inexperienced move drove them off a cliff like lemmings (Matthias Schoenaerts); and Tom Sturridge as Sergeant Troy, who may be the frontrunner of the trio only due to his inability to control his testosterone. 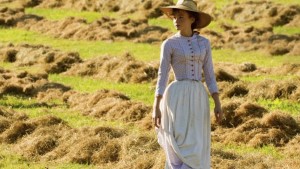 Vinterberg was a Dogme 95 signee although this classical adaptation bears little resemblance to an actual Dogme genre film. Vinterberg manages to crunch all the important elements of the story into a solid two hours. By contrast the 1967 version stretched the events in nearly three hours. Both versions of this title, by the way, are keepers.

The previous movie adaptation was highlighted by the star, director and writer of Darling (the lead role of which won Julie Christie an Oscar® the year before). The 1967 version is available in a Warner Archive Collection Blu-ray and the transfer is sumptuous. Nicolas Roeg was the cinematographer – and indeed he shot some of the best films of this era before becoming a director of provocative films. Roeg uses slo-mo just once, a shot of Everdene tossing grain in the air, a scene that also occurs in a more naturalistic manner in the Vinterberg’s version.

The current version in every way seems to have the best casting in mind; Mulligan is a kind of It Girl of hip art films, while Schoenaerts and Sturridge and Sheen define the three kinds of handsome men that women like. Look at the name of the protag heroine, Everdene. Although spelled differently, that’s the name of the distaff lead of the current most successful young adult franchise – The Hunger Games.

Far From the Madding Crowd comes courtesy of Fox Searchlight, and it’s as tony a film as that part-cult part-art house distributor has handled. Acting across the board reaches into the viewer’s soul. This is a tale of independence and modern thinking, even though the characters and situations are attired in accoutrements of the past.

Vinterberg throws in a couple of slight curve balls by suggesting that even though we’re mired in the morays of the past the characters on display act with the same motives and flagrant need for compassion as the present time.

Far From the Madding Crowd opens in an exclusive engagement this weekend at the River Oaks Three.