I will be staying in Texas during the People’s Climate March/UN Climate Summit this week, though I do miss New York City’s vibrant, tightly packed vastness. Right now, this frontline can’t spare the people or the expense. We need more organizers against deportations and racism, for clean air, for healthcare for women, against police violence. Also, I may soon need to help move many boxes of books, because rents are rising and our radical library, Solidarity Houston, is losing its space. Again.

I can see why the folks at 350.org decided that we should all go to New York. New York occupies a larger-than-life space within our national identity. Events there seem to echo farther, somehow. Trends are set. Ideas seeded. I grew up in upstate New York, nearly seven hours from New York City, but we still sometimes referred to it as simply “The City.” We were within its gravity, that self-described center of the world, one of the great capitals of global empire.

And since Hurricane Sandy showed us that New York is also a frontline of climate change within the U.S., it makes sense that 350.org would use its unparalleled megaphone in the U.S. climate movement to bring people and resources there.

The only problem is that 350.org can’t seem to find the real frontline. Those of us who were in New York during and after Sandy know the frontlines: the Rockaways, Coney Island, Staten Island, Redhook. What will the so-called “People’s Climate March” do for the people who were most affected by Sandy and are most threatened by the next big storm?

Did anyone ask these communities what 20,000 climate activists could do for them? Logistical nightmares aside, do they have any buildings that need repairing, any gardens that need expanding? Is there anything the marchers could do to oppose local forces of gentrification, police violence, or racism in a way that might actually improve some lives? Maybe some local institution(s) to target with a bit more local relevance than the United Nations?

I’m reminded of a conversation I had with a 350.org staffer about why they thought standing in front of the White House was a good use of the movement’s energy. I wanted direct action and grassroots, ground-up solutions that ask nothing of institutional Power but instead use our collective energy to build resilience and capacity. The 350 staffer agreed with the bottom-up approach, but insisted that the situation was so dire that we had to appeal to Obama and others in power, that the grassroots need some top-down help to get the job done.

That sounds great, until you ask how much energy is being hurled at the walls of the White House (or the UN), only to splatter and evaporate like so many water balloons? Supposing Power listens, who has the privilege of being the singular interlocutor? Governments do not negotiate with tens of thousands of individuals. Can we trust Bill McKibben to speak for the interests of people most impacted by climate change?

But let’s not bother too much with that rabbit hole. We can expect the UN to be about as useful as FEMA after a hurricane, regardless of how many attendees 350.org can tally on their lobbying resume.

We can also expect 350.org to continue to organize these rallies because they have been integral to 350’s growth as an organization. Not counting the regional 350 chapters, 350.org is a small, skilled group of people with a big online presence and some institutional money. They’re much more set up for successfully organizing a big rally than the more intricate work of mass-scale direct action (including mutual aid).

So let’s just sit with the frustration for a moment. I was certainly frustrated, watching the Keystone Pipeline being built in Texas. I mean that literally. We chased the pipeline construction all over East Texas. It felt like we were running in place, watching the same dusty 75-foot wide easement clear-cut into each landscape, the same trench, the same puke green pipe. Dozens and dozens of construction sites that hemorrhage money on a bad day (meaning sit-ins but also heavy rain; let’s give Mother her due when it comes to fighting these projects) – and 350.org kept talking about Keystone XL North and appealing to the better nature of the guy who routinely green-lights the murder of civilians by flying death robots.

Yeah, it was frustrating. It was also undeniably useful to fund a few folks’ travel to the East Coast. Regardless of 350.org’s structure or vision, a gathering of thousands is still a powerful place to be.

The question for radicals is, as usual, a question of navigating currents of human energy larger than ourselves. Though it may be relatively directionless and frustrating, the so-called People’s Climate March will bring a big flow of climate aware humans into New York City, and local organizers will have to harness as much as possible before it dissipates. We need to know when to ride the wave and when to redirect it or subvert it.

I can’t speak to how that could best be done in New York, because I haven’t been back there recently. I just hope every marcher who shows up to the so-called “People’s” Climate March builds at least enough connection to the people of New York that they return when the next Big One hits the coast. The power in NYC doesn’t lie with the United Nations, and most of it doesn’t even lie with the NYPD. New Yorkers themselves are the primary power – and the larger movement will definitely play a role in whether New Yorkers become organizers or refugees (or both).

If y’all were coming down to Texas, I could think of a few productive things to do while you’re here (though I’m a newcomer myself so I can’t actually extend such an invitation). Houston may not be as much of a “symbol” as New York or DC and may not fit 350’s narrative as well, but it is every bit a capital of global empire. This region was the birthplace of the oil industry and is a global hotspot of petrochemical plants, refineries and corporate headquarters. Boomtown Houston, with its shopping center parking lots and highways, is as nakedly capitalistic as Las Vegas. While other cities hide their dirty and dangerous infrastructure (or outsource it to the Gulf Coast), Houston’s infrastructural guts are splayed open for all to see. Blame it on super-lax zoning, a history of good ‘ole boy politics and a race-to-the-bottom strategy for attracting toxic industry.

Coming soon to Houston: the Port of Houston (and affiliated dirty energy infrastructure) is expanding to accommodate the expansion of the Panama Canal and increased domestic production from fracking and tar sands. One of the last remaining abortion clinics will close this Fall. Meanwhile, gentrification, police violence, human trafficking and deportation seem to be on the rise as an increasing flow of migrants, refugees, work-seekers and children cross the border, some 300 miles away. All this seems to be fueling the growth (or at least visibility) of frightened, awkward and ill-informed white supremacists with guns.

It remains to be seen whether 350.org’s base, generally white and middle class, would be willing to exercise mutual aid with frontline communities, not by saying “We should do…!” but rather asking “What can I do? How can I help?” Still, I do know that lots of people-hours are needed to go door-to-door, make phone calls, grow food, to cook food and share stories, to make art, repair homes, teach children, to cop-watch.

That doesn’t mean 350.org should flood neighborhoods with well-meaning but uninvited volunteers – sometimes it is better to support from home and donate your travel budget to a frontline group. Or, to put it simply, as a Houston organizer named Jorge Lugo did when I asked him about 350’s rally strategy: “Stop tokenizing us and fund our solutions.” 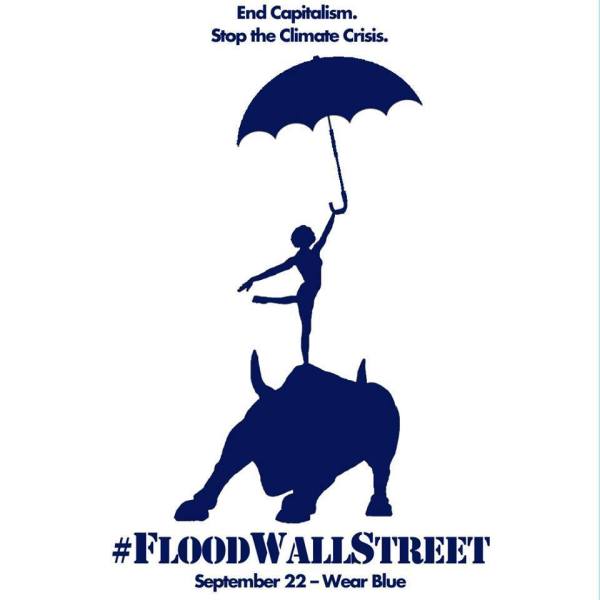 350.org’s big march is permitted by the NYPD and includes no planned arrests; unaffiliated actions like the one advertised here will attempt to use its momentum to actually impact corporate power.