Williams hasn’t taken off as a movie star in the manner of, say, Kevin Hart. Both comics are diminutive, 5’5” and 5’4” respectively. But it’s obvious he has stage charisma that would easily transfer to the big screen. Williams has had small roles in films like Norbit and Scary Movie 5. 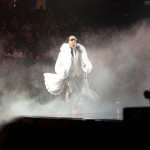 Williams is more profane than Hart. In fact, there are few stand-ups who can constantly say, “mother fucker” and “what the fuck” with the hyper eloquence Williams musters in this one-hour show. A spirited and flamboyant stage manner shows the kind of spit and fire you can image from a public figure that constantly gets arrested.

Williams makes light of his several arrests in his act. A typical Williams bust is for something like shoplifting or leading the heat on a low-speed pursuit while driving a three-wheeled motor vehicle.

Williams touches taboo subjects like race and death and pussy and swimming in the ocean. Yet he never seems taboo in his delivery so much as a prophet of wisdom with a nasty bent.