The mark of a good documentary is being engrossed in a subject one previously gave little thought. Red Army tells the story of the Soviet hockey league from the 1950s through the 1990s. The state team was all but invincible but as Gabe Polsky’s film illustrates, the players were cajoled with threats and punishments into being the best. As the story winds down we follow the generation of players that migrated into American hockey league teams.

Perhaps not coincidentally both Red Army and Leviathan, which are both about Russia, open this weekend at the Sundance Cinemas Houston. 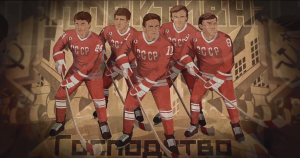 Leviathan, as acclaimed a film as has come out in the last year, seems resigned to art house exposure and film festival berths. Director Andrey Zvyagintsev weaves many layers into a story about corruption in modern day Russia.

On one level Leviathan is a murder mystery where there are multiple suspects, and perhaps the death is even a suicide. But that takes the balcony to the main thrust of the tale, one that mixes metaphorical images of coastlines and large skeletal sea mammals with the attempt of one landowner to prevent the local mayor, or maybe even the clergy, from taking over his homestead. Ambiguity is the bread and butter of Zvyagintsev’s directorial style.

If a gunshot is heard it doesn’t mean the next shot explains what exactly happened. If a long-suffering wife has an affair it doesn’t mean she’s acting out of love. If a main character constantly drinks it may not mean he’s an alcoholic.

There’s a courtroom scene in Leviathan where the court official speaks in a voice so fast it sounds like the auctioneer in a Herzog film if not a local car auction. You just feel that justice is skewed when the words are being spoken at 175 miles per hour.