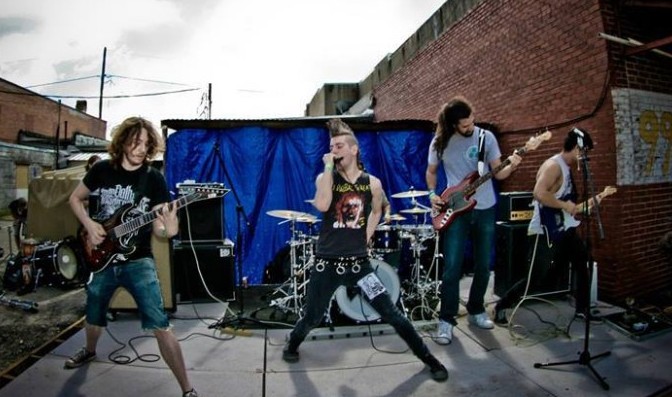 There aren’t too many people who know me that well, but those who do know that punk rock has always been something near to my heart.  While Ramones will always be my first love, it was Minor Threat who inspired me to pick up a guitar and start a band.  Years later, I’d fall for Rancid’s album “Let’s Go” and meet them the same night that Goat’s Head Soup would burn to the ground.  However, as time has gone by, great punk albums seem to have almost disappeared from the music world.  I love this city and the punk legacy we’ve built here.  We’ve had our share of great punk bands like The Hates, 30 Foot Fall, and so many more that I don’t have the time to mention them all.  But, in covering the “what’s happening” in this town, I’ve come across some pretty good punk bands lately.  One of those bands, is Houston’s Some Nerve.  You may have seen them live, as they’ve been grabbing the opening slots for most of the legendary punk acts who have rolled through town lately.  Last week they released their self titled album on Dying Scene Records for FREE, and luckily for you; the price wasn’t the best part of the release.

I should start by saying that while there are some punk elements to this album, a terrible sound quality isn’t one of them.  The guitar parts alone are more complex than what I’m usually used to with a punk release.  There are solos on some of the songs, which really shocked me.  That’s not a bad thing, just different.  The drums are also a little closer to what you’d hear on a speed metal album, also; not a bad thing.  The album’s opener, “Trenches” is actually the shortest song on the release, clocking in at a little over a minute and a half.  It however sets a really great tone for the rest of what’s to come.  There are moments where the pace feels like early Bad Religion with a little heavier guitar.  The following track, “Held Hostage” is full of speedy riffs with two guitar parts, which is seriously insane to hear.  The bass just jangles along throughout the track like it’s being played by a seasoned punk veteran.  The fourth song, “Porcelain Throne” opens like a Metallica song from the era where they were worth listening to, before it segues into dual vocals and a break neck rhythm.  Proving how punk rock it still is, there were times when this song felt like GBH’s “City Baby Attacked By Rats.”

The sixth track however, “Dead To Me” really felt like the standout song on the album. With a mix of early D.R.I. and “Built To Last” era Sick Of It All, it’s the song I listened to most.  I think the rhythm changes on the eighth song, “Texas Massacre” make it a little too hard to ignore how diverse these guys are in a world where real punks seem to disappear.  The complex nature in which these guys go at their songwriting is impressive, but for punk nowadays; it’s almost non-existent.  The album closes with a rapid fire assault for four minutes with the anthemic “Covered In Blood,”  making you realize that Some Nerve get what punk rock is all about.  The release definitely commands a second and a third listen, as there’s more happening in each song than you realize the first time you hear it.

The entire album clocks in at a little over thirty minutes, with some songs going over the four minute mark.  Throughout the entire release, you’ll hear songs that remind you of Rancid, songs that harken back to the dual guitar punk sound that came out of the seventies, and the assault of the eighties hardcore scene.  In utilizing group based backing vocals, Some Nerve have figured out a way to mix everything that came before them, while adding their own spin on the music and making it their own.  In a time where I hear people say things like, “I don’t listen to guitar music,” it’s nice to see that there are still some bands out there like Some Nerve giving those of us who do like guitars; something to listen to.