Leon casino, Misery Loves Comedy leaves a big impression. Perhaps it’s the way the director Kevin Pollock (himself an awesome impersonator/comedian, does a great Shatner and a great Walken) molds this documentary about the art of comedy. There’s fifty plus talking heads, and they are the very people who actually make us laugh in the real world. There were maybe two percent of the people on display giving sage advice or testimonials that I didn’t recognize. Many of the people profiled we know through movie roles but everybody involved has a background as a stand-up or member of an improve theater.

MLC has a high contrast look and reveals the truth about how a comedian gets the actual laugh. There’s a couple of serious moments, like having Freddie Prinze, Jr. recalling a story about his father Freddie Prinze punching out Richard Pryor when the latter had pissed him off and taking off with the ladies who had arrived with Pryor. Misery Loves Comedy doesn’t shy away from the fact that Prinze senior committed suicide. The film is dedicated to Robin Williams, and certainly the film must have been completed or in post when Williams died last August. This is a movie that concerns the psychology of laughter, not the history of comedy, which would explain why, say, Bill Hicks or Lenny Bruce never get mentioned. 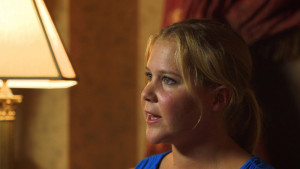 Nor does the film revel in its constant swing towards the depressing side of the act of telling jokes – the dead silence when your joke bombs. One distaff comedian actually mentions a free for all at the “Houston Laff Stop” where customers are beating the shit out of each other.

There’s also a less controversial moment that just had me laughing out loud where Steve Coogan talks about the performance of Michael McKean in Spinal Tap. “Oh, you’ve come to plug in our life support system … the fucking nerve you display.” And how it influenced him. There’s something on display here that stays with your funny bone.

There’s also Ultron, but I signed a pre-nup that prohibits me from talking about anything Marvel. Seriously, what happens when someone with a God complex (me) interviews someone known for playing Jesus Christ (Ted Neeley)? Stay tuned in upcoming weeks for the Free Press Houston interview with Neeley in conjunction with a screening of Jesus Christ Superstar at the Alamo Drafthouse.

The joys and sorrows of adultery are examined in 5 to 7. Anton Yelchin stars as a young writer who starts an affair with a married femme, and the rendezvous take place, you guessed it, between 5 to 7 in the evening. Bérénice Marlohe, Olivia Thirlby, Lambert Wilson, Frank Langella, and Glenn Close co-star. The sum of the actors are greater than the overall arc of the movie. Yet 5 to 7 doesn’t meddle with cloying sentiment and presents the protag’s dilemma in a dramatic manner with a light comic subtext.

Both Misery Loves Comedy and 5 to 7 are unwinding at the Sundance Cinemas Houston.