Have you ever walked into a place thinking you knew what to expect but then your expectation was wrong and it ended up being better than you could have ever hoped for? You know, like the time you were forced to watch The Hangover 2? Going to Bull & Bear Tavern and Eatery on Westheimer is the food version of The Hangover 2. I went expecting typical British food that is not out of this world, but I left a changed person. 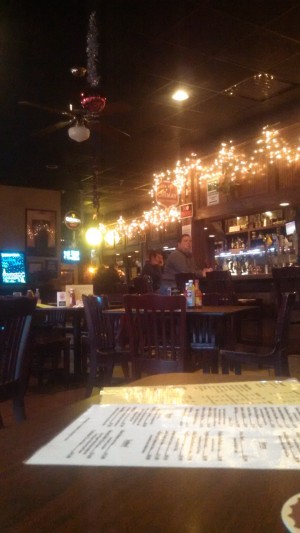 A couple of friends and I went to have dinner and a couple of drinks at Bull & Bear Tavern and Eatery (to be referred to as “B&B,” henceforth) on a Wednesday night. I suggested the spot because I had been there for lunch a while back and remembered wanting to try the Cornish pastie the guy sitting next to me had.

Upon arrival, I immediately noticed that there were way more people than I had ever seen there, but as I stood outside with my friends, waiting for them to finish smoking, I realize that that’s not what seems to somewhat irked me — it was the fact that the lights were on. I had never been to a bar, pub, or tavern that had the lights on so everyone could see everything clearly.

Cigarettes finished, we walked into the tavern and lo and behold, the lighting situation suddenly made perfect sense — B&B was filled with old people! I’m pretty sure that every table other than ours had at least one grandparent sitting at it, and every single one of them was hanging on to every single word of the karaoke singer’s interpretation of Sade as if they were at their grandchild’s choir recital. Now, please don’t get me wrong, I don’t have anything against old people, I was just confused as to why all the lights were on and then consequently was shocked by seeing a bar filled by people between my parents’ and grandparents’ age — as I said at the beginning, it just was not what I expected.

So, we sit down at the only table available; the server comes over and we order beers. After a few short minutes the waitress comes back with our drinks and informs us that there is about an hour left till the buffet is over — this is when someone died and stood at the gates of Heaven waiting for St. Peter to find his key — but one of my friends ignores the buffet comment and goes ahead and orders nachos. We all look at him weird and make fun of him because he passed up a free buffet in order to get a plate that is usually very hit or miss, however, I am curious to see what happens. If you’re anything like me, then you have only one weakness, and that weakness is nachos. 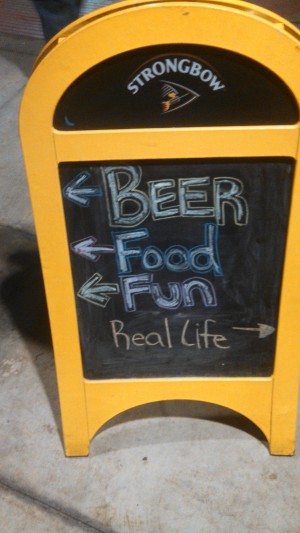 At first glance it may seem that my friend who ordered nachos made a foolish mistake considering we had a free buffet waiting for us to attack it for the next hour, but, if I may put it gently, you’ve never been more wrong in your entire life. The buffet is your typical, single-flavored foods England is so fondly known for; you know, the types of food that you have to douse with Tabasco just to get it to taste like something: Cornish pastie, steak & mushroom pie, liver and onion, etc. The nachos, on the other hand are a work of art. They are without a doubt the Van Gogh of food, the Jimmi Hendrix of meals, the Genghis Khan of appetizers. The nachos are divine.

The nachos at B&B are without a doubt the 8th Wonder of the World in both the old and the new 7 Wonders of the World. They are a mountain of deliciousness, much unlike the usual mockery of nachos that is served at most places. Here, not only are you served a mound of chips covered with cheese made from the milk of Zeus’s own cows, but also the meat is marinated and prepared in such a way that you will have no choice but to bow to the gods of food in sheer shame that you had not known such delight before.

Unlike most places that just top the chips off with a bit of meat, cheese, veggies, and whatever condiments, B&B lovingly forms layers with the chips, cheese, and meat. Aside from the glory-like flavor of the meat and cheese, the fact that they layer their nachos means that you will not only enjoy the chips on the top floor, it means that you will enjoy most of the chips fully accompanied by the rest of the flavors.

Please don’t take this as sheer hyperbole though. I make such bold statements confidently because I consider myself a Nacho Expert, secondly because the buffet actually served a pretty decent variety of food to compare the rest of their “sazón” (flavoring or seasoning) with, and thirdly, because it’s true. The rest of the food at B&B was not necessarily bad, but it was also not particularly good — it was what was expected to be: bar food. The nachos, on the other hand, are probably Houston’s best nachos. Any place that cares enough about its patrons that it layers its nachos, that makes meat specifically for the nachos (instead of using the same meat they were going to use for something else), and then, on top of that, is not stingy on the vegetables and condiments, is a place that has earned my respect because it has respected me. I say that seriously, you can tell way more about a place (or a person even) based on the small details they present than on the big advertisement they want you to see. Based on this, I can attest that Bull & Bear Eatery and Tavern is a place that actually loves and respects its patrons, and places like these are slowly being run out by big, flashy, sterile places.

With that I say, “Cheers! To Bull & Bear Eatery and Tavern.”