Occupy The Galleria: The People Take a Stand for Mike Brown and Eric Garner

Across the country, the non-indictment of the officers responsible for the deaths of Mike Brown and Eric Garner has outraged millions — from social activists to previously apolitical citizens to even, in the case of Garner, specifically, the likes of hardcore conservative and known racist, Bill O’Reilly.

Even professional athletes are sick and tired.  Following the lead of the St. Louis Rams’ “hands up, don’t shoot” entrance onto their football field a week ago, the Chicago Bulls’ Derrick Rose, the Cleveland Cavaliers’ LeBron James, and several members of the New Jersey Nets wore “I Can’t Breathe” t-shirts before games this week.

The greatest indignation, however, comes from none other than…The People.

There are no words for the bitter rancor that courses through our veins.  Supportive t-shirts are not enough for us, nor are hand-and-arm gestures of solidarity before an athletic event.

The People want to scream, cry, punch, kick, yell, curse, and all varieties of fierce damning to hell the so-called justice system and its officials who sit by and allow murderers to go free while calling the corrupt decision-making process “law.”  We aim not just to declare which side we are on, but to fight for that side by disrupting business as usual for the system that continues to oppress us. 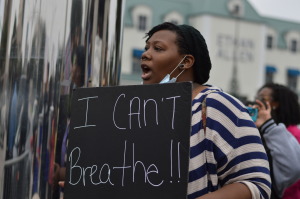 Houston is, indeed, as angry as other cities, and this was demonstrated in no uncertain terms on Saturday, December 6th at noon when somewhere between 800 to 1,000 activists – from first-time to seasoned – convened at the corner of Westheimer and Post Oak in the Galleria area to protest against the callous indifference to human lives, especially those of black people, shown by the police and government.

Participants glowered at and ultimately ignored the directives of the heavy police presence as they chanted “Hands Up, Don’t Shoot!” “I Can’t Breathe!” and “No Justice, No Peace!  No Racist Police!”  While some protestors stood in one spot, others clustered together and repeatedly crossed the four crosswalks of the intersection in order to be more visible and audible to cars and to keep police officers on their toes.

The disruption did not stop there, though.  In an unprecedented and completely unplanned move, numerous protestors, needing no persuasion, soon stormed into the Galleria mall, led by a small group of activists with the National Black United Front. The display of solidarity and conviction was truly powerful.

Inside, the fervor did not subside.  Protestors jumped spiritedly in place, shouting, “Hey hey - ho ho — these racist cops have got to go!”; “I Can’t Breathe, You Can’t Breathe!”; and “We won’t take it any longer!  Justice for Eric Garner!” 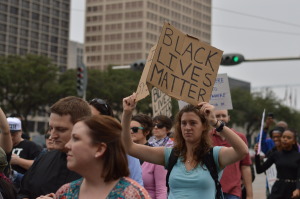 They also rode up and down the escalators, chanting and proudly carrying signs that read “Ferguson is Everywhere,” “Black Lives Matter,” and “Don’t Blame the Victim; Examine the System.”

Perhaps most poignantly, they lay down on the floor near the food court, Nordstrom’s, Macy’s, and the Apple store, to symbolize the fallen unarmed black men.

The “intrusion” was met with mixed reactions.  Protestors report that many customers and clerks cheered them on and whistled in support, and some even joined in, while others looked on fearfully and with suspicion behind bulletproof glass, as some stores – including Visible Changes — began to lock down.  Protestors assure, however, that looting and/or vandalism was never on their minds; they were there to be heard.

One participant, 20-year-old Alex Rae from the group End Mass Incarceration Houston, said of the experience, “Having all the different organizations standing together as one, regardless of their differences, was one of the most beautiful and emotional sights I have ever seen.  I feel like we got the best media coverage, too, not from the official news networks but from all of the people in the stores filming us.”  She also noted that being in an enclosed space made their voices ten times louder than they typically are outside.

One event organizer, Shere Dore, echoed Rae’s sentiment, saying, “I was personally moved almost to tears to see individuals take charge and lead with natural ability.  We’re not going to agree on a number of things, but at the very least, coming together in unity is far more important than any ego or agenda.”

Efe Osaren, a third-grade teacher in 5th ward and a full spectrum doula, participated as well, but had criticisms.  She felt that the rally was successful, but was disturbed that most shoppers in the Galleria seemed to care more about consumerism than black lives.  She also hopes that future actions will do more to “amplify the voices of black cis women, trans, and non-binary black people, whose lives have also been lost at the hands of police or government officials, but who are often forgotten.”

Finally, she laments that the public in general does not fully understand systemic oppression and how it kills black people on a daily basis.  “Voting will not change anything,” she says.  “People need to better understand white privilege and intersectionality.  This is about race and will always be about race as long as this system exists.  The cure is not black people embracing respectability politics but for people not to be racists.”

During the protest and after, social media was flooded with articles about what was going on.  This was naturally met with either disgust or approval.  Many believe that this disruption of business activity – and other daily activities like it, including, in Philadelphia, protestors blocking 70,000 people attempting to leave an Eagles game – is pointless, ineffective, and hurting the wrong people.  They argue that stores and businesses are not the government, nor the police, and that they shouldn’t be punished.  They also argue that blocking roads and/or preventing ordinary citizens from leaving sporting events is foolhardy, at best, as irritating people will do precious little to get them onboard as allies to the cause.

But others believe that it is this exact disruption of the normal order of business that is needed in order to finally get people to listen.  These businesses may not, in fact, have any direct relationship to police brutality or the justice system that routinely rules in an unjust way.  However, protestors recognize that, historically, change only happens when The People refuse to back down, refuse to be silent, and insist upon dismantling the system – which includes everyday business activity – until the government begins to take them seriously.

This was the case when it came to workplace deaths and child labor in the past, when it came to civil rights, and when it came to slavery.  Things only changed when people rioted, made a lot of noise, and refused to let any aspect of the system function peacefully and without disruption.

Those who can think only of a store’s sales for that day or for that week, or of store managers whose feathers are ruffled, are short-sighted and do not truly care about social justice in the long-term.  As for inconvenienced sports fans trying to get home from a game, one would hope that they would, despite short-term irritation, recognize that the unjustified murders of American citizens that go unpunished is by degrees more important than the sporting event they just attended and the delay in getting home.  Those who do not recognize this are likely not – and would never be — potential allies to the cause anyway.

What the protestors did at the Galleria on Saturday, December 6th in Houston and what protestors are doing elsewhere throughout the country should offend nobody.  A community is rightfully angry because their children, their fathers, and their husbands are being murdered, and the murderers are getting away with it.  This outrage and desire to change things, using highly disruptive tactics, is something everyone can and should understand.

Not long ago, I had a conversation with a white male businessman in which we happened to get on the subject of a news story from about a year or two ago – the white Texas teenager who, while driving drunk, plowed into another vehicle and killed five or six others.  The boy got off completely, in large part because of his family’s wealth.  Indeed, the “justice system” decided that he need not suffer consequences for his actions.  The man I spoke with told me that that if it had been one of his kids killed by that boy, even if it was a drunken “accident,” and the justice system decided he should be able to just live his life as if nothing ever happened, without so much as a week in jail….well, he would kill him.  As simple as that.  He would go to prison because he would definitely kill the boy himself.

If ever there was a time for activists and highly rankled Houstonians to break new ground and finally breach the walls of Houston’s hub of money and wealth — The Galleria — now is the time.  Telling people that causing store shutdowns or freeway blockages is “just stupid and ineffective” is ridiculous.  In any other context, we would acknowledge that the best way to get someone to do what you want is to make it in their self-interest – not yours — to do what you want.  It is no different here.

A dozen stores closing may, at this point, look like a small feat, but the hope is that this is just the beginning stage.

According to lawyer and long-time activist Burke Moore, marching into and occupying the Galleria is something activists have considered and wanted to do before, but no past protest contingent, whether numbering a dozen, eighty, or eight-hundred, ever actually took the initiative to do so.

Saturday’s daring move, therefore, was truly ground-breaking and may well set the tone for future protests and brazen acts that challenge business interests.  Moore proudly stated that, “On Saturday, hundreds upon hundreds learned to not be afraid to take a space for the public good. For years, we have been learning not to be afraid.  What we will do next, what courage we will gain next will make this achievement look small, but for those of us who participated in it, the simple act of marching into the mall was an act of glorious conquest over our own fears.  We are not finished.”

Indeed, we are not.

Another protest is planned for Saturday, December 13th at noon at Gerald D. Hines Waterwall Park, 2800 Post Oak Boulevard (near the Galleria).  Get your friends and family to attend.  This time, not just 1,000, but 10,000 to 20,000 Houstonians need to march into the Galleria mall and collectively shout, “No more!” Recognize that Power is in the will of The People, but only if we truly wield it.

For more great photos from last Saturday’s Galleria shut-down, check out our friends over at Mujeres En Medio. 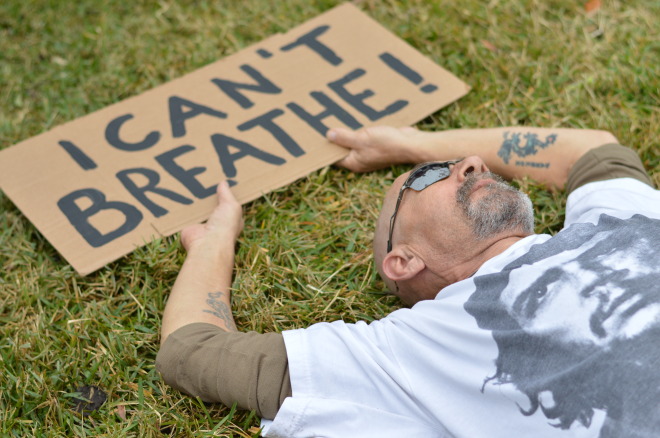 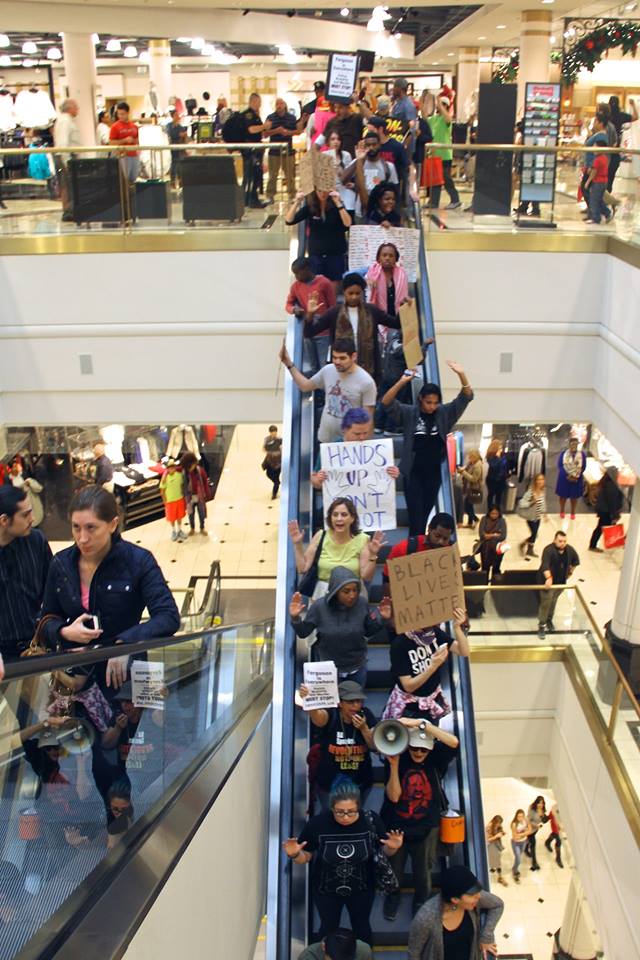 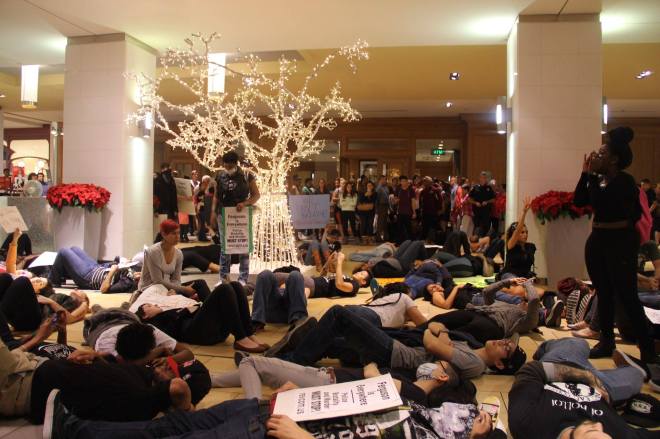