Ride the D Train to Maggie

Leon casino, There are so many films opening this weekend, wide releases and one-shots four-walling it at diverse venues all around town. If an average filmgoer were to try to see everything they would explode.

With that in mind let’s start with some icing on the cake. From the AlamoDrafthouse Vintage Park press release: “Acclaimed character actor Pepe Serna will visit Houston on Saturday for screenings of Man From Reno. Serna has stared in movies including Scarface and American Me. His new film, Man From Reno, is a neo-noir about a Japanese mystery writer who teams up with a small-town sheriff to solve a murder mystery. Pepe will be hosting Q&A sessions after the 3:30 PM and 6:30 PM screenings on Saturday, May 9.”

Starting this weekend the Vintage Park venue will also unwind the indie comedy The D Train starring Jack Black, and co-starring Kathryn Hahn, James Marsden, and Jeffrey Tambor. Black unwisely uses deceit to trick his boss into a trip to Los Angeles. At the bottom of his plan is to use the trip to reconnect with the guy who was most popular in high school (Marsden), who is now baking in the success of a role in a nationally televised commercial. 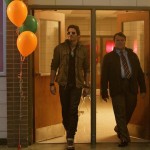 They hook up and party like whores. In a twist at the end of the first act Marsden fucks Black, and then the next day acts like it’s no big deal. Meanwhile back at home Black gets tangled in the web he’s created, lying to his boss and having Marsden stay with his family while they all attend a high school reunion.

The sexual jokes are handled with a finesse that makes the situation sophisticated while a good deal of the plot revolves around the fake persona Black has created. For instance Black claims to be a computer expert to his boss but lies about how hard it is to share emails or sign up for Facebook. In the end it’s Black’s comic mojo that keeps the film firmly on the rails. The D Train will be opening at several area theaters.

The zombie genre gets turned into an art house drama in Maggie. Horror buffs looking for a gore fest will be left standing dry and drama mamas will be amazed that Arnold Schwarzenegger can turn in an emotionally nuanced performance.

In the near future a disease turns people into, yup, zombies. Only the premise doesn’t revolve around people running after each other and munching on brains so much as one family’s journey through this void. Arnold’s daughter (Abigail Breslin) has been infected. He’s left with a choice of Biblical proportions. In a month the state will pick her up from the house, as she will have begun to turn by that time, and deposit her in a quarantine center. There she will die in pain and misery. But Arnold’s friend who works in the roundup and control of the epidemic advises him to just quickly and painlessly put her out of her dilemma.

The only scene that came close to offering horrific imagery is one where Breslin unwraps the bandage on her arm and it’s swollen with worms and pus. The rest of the film rests rather dramatically on the interaction between Arnold and Abigail. Breslin was nominated for an Oscar and is still a teenager. My feeling is that Schwarzenegger had to bring his A-game to keep up with her. Maggie unwinds at the AlamoDrafthouse Mason Road. 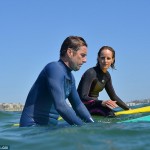 In another booking that suggests the distributor didn’t have the clout to get into the River Oaks or the Sundance or the AlamoDrafthouse the movie Ride opens at the AMC Gulf Pointe 30. Ride is also currently available via VOD.

Ride marks the second writer/director turn from Helen Hunt (herself an Oscar winner). The film rides a wave of discovery as Hunt goes from her affluent New York City editing job to the California surf bum lifestyle to spy on her son and in the process has her own moments of self-discovery. Hunt’s writing is sharp and assured as she takes simple family related themes and addresses them through equal amounts of drama and comedy. Luke Wilson co-stars.