THIS THING WE DO: A Film by Flash Gordon Parks

Leon casino, The past is malleable and flexible, changing as our recollection interprets and re-explains what has happened.

Documenting history raises questions not only of accuracy, but also perspective. How does one frame phenomenon?  How does one present not only what occurred, but also how that was experienced? Houston is now getting its run of hip hop documenting, there was Peter Beste and Lance Scott Walker’s book Houston Rap , there is Diary of a Madman, the Scarface memoir, and there is the recently released Sweet Jones: Pimp C’s Trill Life Story by Julia Beverly. So one could say that now is a perfect time to shed light on an equally important aspect of the Houston music history — the role of the DJs — which ethnomusicologist Flash Gordon Parks hopes to do with his film This Thing We Do.

This Thing We Do discusses, mainly, the role of the DJ in creating culture, or at least helping to direct it. When breaking records was a thing, it was the DJ, who orchestrated-block parties, house parties, the radio — the DJs were at the forefront of judging what was hot and presenting it to the people. 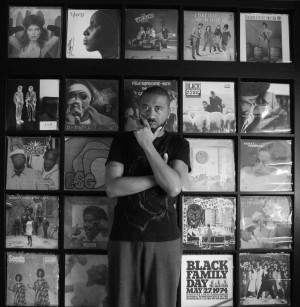 “My main objective was to show really how diverse and how interesting Houston’s music scene is at large, and how the DJ is crucial because he’s the guy who does all the hard work for you,” Parks noted, “He goes through and he finds the interesting records that he feels — or she feels — should be shared, so I wanted to really tell that story, and in the process I knew there were certain people that I identified with that were pioneers or groundbreaking, or just undeniable.”

The film is really expansive in its vision incorporating everyone from Chuck Roast, Don Samuel, and Daryl Scott to DJ Cipher, Def Jam Blaster, DJ Sun, and Dj Witnes.

“So from there I pinpointed those people…definitely Don Sam, definitely Cipher, definitely DJ Sun, definitely Blaster — those were people who I personally witnessed things from,  that I got turned on to in that perspective. And then once you talk to those cats they clue you in to whoever was around at the time that didn’t have maybe the longevity they had, but were just as important to cultivating nurturing those scenes that were going on at that time.”

The film does an excellent job at showcasing the history of DJs in the city from radio, to the infamous MacGregor Park car showcases, to local radio like KPFT, to music staples like the majestic Soundwaves on South Main, to the various hip hop clubs and DJ nights that happened sporadically throughout the city. The film explains how either through those DJ residencies at clubs or on radio, or as employees, and at times owners, of record stores the DJ was able to put the seal of approval on records primarily through association of that DJ and their track record.

One of the film’s figureheads, Daryl Scott, I was unfamiliar with, but what I learned was priceless -from his role in the MacGregor park jams to his role in helping to create mixtape culture in Houston and having a hand in developing the idea for “screwing” records which happened by using a screwdriver to slow the heads of tape deck

“Daryl Scott is another that I felt was significant because it took me a long time to get him to actually sit down, but I know that I couldn’t do it without him, he was a major piece. He was a good friend of my cousin, they grew up together, and as a kid I got some of those early tapes through my older cousin who would pass them down, so I was listening to a lot of that stuff- pre-Screw — so when Screw really made the impact I was able to connect those dots and I feel there’s a whole generation that aren’t able to connect those dots because they were just too young to know Daryl Scott, because, to me, Daryl Scott is the mixtape king of Houston, he was doing it well before anyone ever thought of it.”

And for anyone who sees the film, there are tidbits of history that are really amazing in terms of highlighting often overlooked aspects of the Houston music scene and also illuminating the history of music and its transformation over the last 30 years.

People will have a chance to view the film August 1st at Cactus Music (2110 Portsmouth St at 7pm) and see for themselves an enthralling document of the DJ culture in the city, probably with many of the people in the film present, including Flash Gordon Parks and Damien Randle, who shot the film.

Today, it is not uncommon to hear of an artist from looking at a music website like Pitchfork or Stereogum or a blog like Okayplayer, or having a friend send a Soundcloud link, or even Dropboxing an album to you. Music is more accessible than ever now-for better or for worse- and the role of the tastemaker, once relegated to Djs, has now taking on a less important role.

This Thing We Do is pertinent in its display of how things once were. As music has become sort of an insular experience with computers and headphones taking precedence over the communal experience of block parties and clubs, the hunting of records and whatnot, it’s hard not to ignore the loss, the bygone sense of excitement of hearing the record for the first time on the radio or at a party, the satisfaction and fervor of finding a jewel to blow people’s mind with, the importance of record stores which now have all but become extinct. It is a document of a time in culture that seems lost, that many have never experienced, it feels special to those who were there and is essential knowledge for those who were not.

“One of the things I wanted to point out is Houston’s culture is not only important to Houston, but to the world at large, because so many things that these guys have done have affected how other people do it, and we rarely get credit for those things.”

Focused Chaos: The Best of The Week