Decrease Font Size Increase Font Size Text Size Print This PageSend by Email
With a lengthy title like A Pigeon Sat on a Branch Reflecting on Existence, you know you are in for some phenomenological musing on the state of humankind. Swedish director Roy Andersson does not let a discerning audience down although the film will obviously be too austere to appeal to a mainstream audience. And that’s actually a good thing.

Leon casino, Andersson literally has made a film where there’s not a single close-up, nor does the camera ever move. Not once does the stationary point-of-view get closer than several feet from the tableau settings. The action unfolds in a wide-angle manner with a series of takes that vary in length.

The main story, set in the current day, follows a couple of hapless salesmen that behave like a gloomy Laurel and Hardy. They are selling novelty items such as vampire teeth, a laughing bag (the noise of laughter is emitted when you turn the bag upside down) and a grotesque rubber pullover mask known simple as Uncle One Tooth. Their faces never smile as they demonstrate their wares to potential customers. 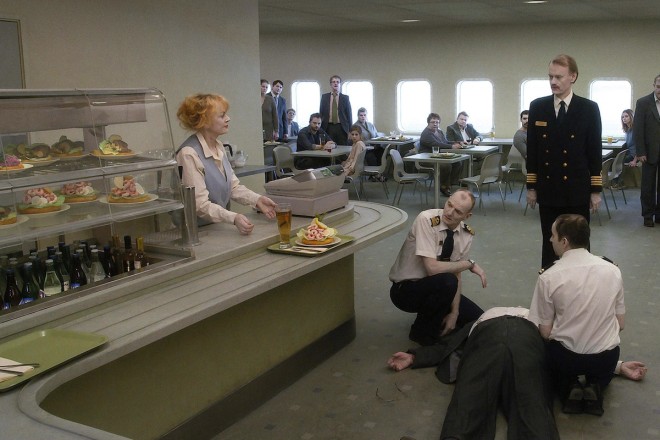 Every once in a while Andersson combines present actions with historic events, adding anachronisms to the storyline. For instance, the lead duo sits at a restaurant knocking back a brew after a hard day of door-to-door sales. They are astonished by a sudden army of men, both on foot and on horseback, that parade past the front windows in a shot that last several minutes. You almost wonder if the extras are circling the set to make 30 people and horses look like hundreds. And then in walks King Charles XII, a monarch from the early 18th century who was historically killed in battle. The significance of this sequence will surely be apparent to Swedes or those familiar with Swedish history.

The tone is deadpan comic, at least up until the third act. Here Andersson inserts a shot of a monkey being shocked in a lab experiment in another lengthy shot with several layers of depth. This is followed by what appears to be a scene where 19th century colonial types are herding black people into a Swedish (Boliden) ore smelter and burning them to death.

The film ends as it begins, with our hapless heroes unable to sell their novelty items with any degree of success. Along the way the audience has plenty of time to contemplate the cruelty of homo sapiens and the meaning of death. If that doesn’t appeal to the art house crowd I don’t know what does.

A Pigeon Sat on a Branch Reflecting on Existence unwinds at the Museum of Fine Arts, Houston this weekend on Friday, Saturday and Sunday.

Jus Coolin: The Best of The Week