Industrial capitalism has pushed life on Earth into what scientists call a “mass extinction.” Mass extinctions happen from time to time; there have been five in the Earth’s history, caused by events such as asteroids striking the earth and photosynthetic bacteria filling the atmosphere with oxygen, an element that was poison to a previous generation of oxygen-hating bacteria. The Oxygen Catastrophe happened about 2.5 billion years ago. In a way, humans are now reversing what bacteria did: filling the atmosphere with carbon instead of oxygen, eliminating other species with our byproducts. Earth had the Oxygen Catastrophe; now it has the Carbon Catastrophe. Ocean acidification is a good example of how this affects other lifeforms — as the oceans absorb carbon from the atmosphere, they become more acidic, and coral reefs die. Coral reefs are some of the most diverse ecosystems on earth; when they go, thousands of species go with them. 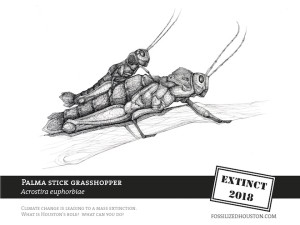 At present, overfishing, overhunting, deforestation and habitat fragmentation are the main drivers of the ongoing sixth extinction, with 1,000 to 10,000 times more species going extinct over the past 100 years than do normally over the course of evolutionary time. Meanwhile, climate change is happening too quickly for many animals and other creatures to adapt or evolve — climate change means that the sixth extinction will continue for a long time even if we were to fish and log and consume differently.

Biologists expect 25-40% of all species on the planet to go extinct by 2050. Extinction also impacts humans, since we depend on other species for food, and those species, in turn, depend on complex ecosystems composed of lifeforms that we don’t use directly. It’s not just about them dying, it’s about human beings suffering and even perishing as we strip the foundations from the house we’re living in. Without a major shift in consciousness, consumption, and policy, 75% of all species on the planet may be gone by 2100. 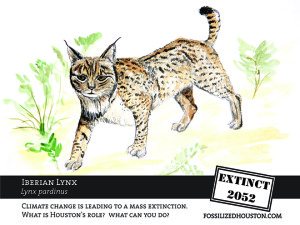 Contributing to such a shift in consciousness is the goal of Fossilized in Houston, a public climate art campaign organized by Matthew Schneider-Mayerson, Lina Dib and Tony Day. In the last few months, you may have noticed stickers, posters or lawn signs depicting climate-endangered creatures on surfaces around the city. You might be in the restroom of a bar, walking through a parking structure, waiting for a bus, or driving past a suburban lawn, and suddenly a kemp’s ridley sea turtle or an african wild dog or an astingy leaf chameleon stares back at you. These animals come labeled with their likely date of extinction: 2019, 2024, and 2031. With an Idea Fund grant, Fossilized is commissioning Houston artists to create images of species threatened by climate change and, with the assistance of dozens of volunteers, placing them throughout Houston as lawn signs, posters and stickers. Fossilized has two meanings here: many species will soon be reduced to fossils; and fossil fuels are driving this process. The link between climate change and extinction is about how humans use fossils to create fossils. 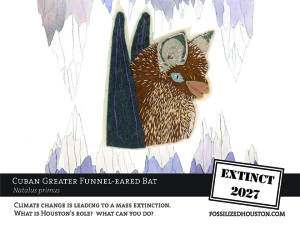 As we all know, Houston is the global megacenter of the oil and gas industry, with 5,000 energy companies calling it home. For decades, many of them have successfully lobbied state and federal governments to kill regulations, deny or minimize climate change, and generally slow the necessary transition to renewable energy. The point of Fossilized in Houston is to fill the City of Oil with images of the species that will become extinct in the Carbon Catastrophe. What was “environmental,” over there and out of sight, begins to look back at us. It’s as if the endangered creatures have started to insist on living in our home, like guests who overstay their welcome. 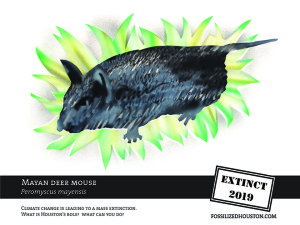 The Fossilized website suggests some ways to act in solidarity with climate-endangered animal species, but how people respond to the project’s images is an open question. You might be angry or resentful at the campaign for making you depressed and nostalgic. You might be indifferent, or even get some pleasure from seeing the animals before they vanish. You might become a vegan and burn your car, or divest from big oil. These animals have been on earth for millions of years. Now perhaps you will consider the northern hairy-nosed wombat for seconds while urinating or drinking coffee. As Schneider-Mayerson puts it, these encounters are a precondition for the kinds of political and policy changes that would make a real impact:

Misinformation, routine, social norms and fossil-fuel dollars keep us from appreciating and internalizing the changes that are underway. Intellectual awareness is fleeting, it’s not enough. By tapping the city’s wealth of talented artists to remind Houstonians of the consequences of the actions of some of Houston’s largest corporations, we’re hoping to spark an emotional awareness of the ongoing mass extinction as well as the profoundly unjust human consequences of climate change.

Fossilized in Houston is a machine for generating these encounters by peppering the city with climate-endangered species. The parts of this machine are local artists, images, the web, snail mail, and friendship.  In theory, the machine could run indefinitely, on relatively small amounts of energy. And you can be part of it, too—if you put in an order (fossilizedhouston.com), images of soon-to-be extinct animals will arrive at your house. A BOG TURTLE or CERULEAN PARADISE FLYCATCHER might be an eye-pleasing way to send the message that you care as much about the Carbon Catastrophe as those oxygen-hating bacteria did about the Oxygen Catastrophe of 2,500,000,000 BC. 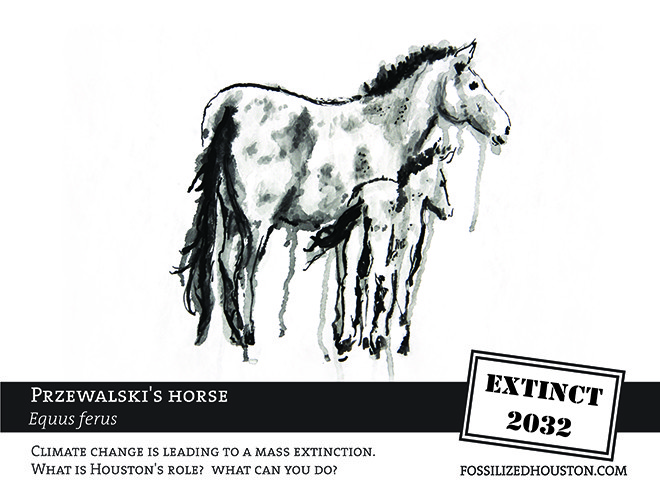 Deep Cuts Fills Up The House