Leon casino, The show Fireball XL5, a British episodic series set in outer space from Gerry Anderson, has many characters and devices seen in subsequent sci-fiers like Lost in Space and even the Star Wars films. Fireball XL5 (3/10, Timeless Media – Shout! Factory) ran for 37 episodes in 1962 and 1963. The show came after Anderson’s Supercar and before other ’60 shows from Anderson’s company like Thunderbirds and Stingray.

Fireball XL5 stars Steve Zodiac essentially playing himself as Captain Steve Zodiac. Here’s the catch: Zodiac is a puppet. Anderson developed and excelled in a process known as Supermarionation. An extra on the disc features Anderson talking about the painstaking work that went into making the marionettes move. Anderson even used the first, according to him, instance of video playback to view sequences that had just been shot. In this case to see if the mouths were moving properly to emulate speech.

There’s a robot that makes robot sounds, an older officer who has bushy eyebrows and talks like Water Brennan, a sexy co-pilot who dances to rock music and talks like Zsa Zsa Gabor, and even a hybrid cat/monkey or some kind of puppet animal that purrs and precedes Lost in Space’s The Bloop. Whether you watch this show for its camp value or simply because you cannot believe what you’re seeing, one would be hard pressed to recall any show like Fireball XL5.

Shout! Factory’s March releases also include Werner Herzog’s 1972 Aguirre, The Wrath of God (3/17). Pic was an inspiration for Apocalypse Now as well as a film that propelled Herzog and Klaus Kinski into the art film spotlight. The Blu-ray transfer looks sharp and the disc has two separate director commentaries, one in English and one in German (with subtitles). The film Marooned tells the story of astronauts trapped in space and was released during the Apollo era. The film won an Oscar for special effects and boasted a cast with Gene Hackman and Gregory Peck among others. Somehow the film’s rights lapsed in the ‘90s and was acquired by a small company that released it as Space Travelers, where it can be found on Mystery Science Theater 3000: Vol. XXXII (3/24). This box set also includes the original Steve Reeves vehicle Hercules (1958). 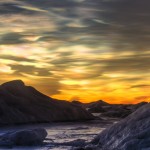 An amazing documentary that is literally 75-percent time-lapse will thrill those interested in science as well as lovers of pure cinematic poetry. Antarctica: A Year on Ice was literally shot in the southern most continent over the period of one year. Music Box releases the doc on VOD (video on demand on March 27 in advance of its April Blu-ray release).

Anthony Powell, who wrote and directed, also designed and built machinery to mount the camera with tilt and dolly axis for the time lapse effects. The summer and winter get equal screen time. Stunning photography of aurora displays and nacreous clouds are mesmerizing. A typical shot shows the sun racing across the sky over the period of a day, low in the horizon, for the last time as a months-long period of darkness descend on the polar camp. Weather conditions, maintenance of equipment, storing supplies and penguins are also given their time in the snow.