Leon casino, “Do you know how X-rays were invented?” asks a man with thick glasses. We are looking at the bones of a long-dead stranger in a X-ray viewer for sale at The PLACE Upstairs.

It is a Thursday night, and he is taking a break from studying for his medical boards.  The test is in three weeks.  He’s going into either pediatric psychiatry or pediatric neurology.  He tells me about a baby he saw who was born without a cranium. The team of doctors, who knew of the unborn child’s condition, recommended a cesarean, but the mother insisted that the child be naturally born, baptized, and allowed to live as long as it would. It lived three days with its brain exposed to the air.

Another customer is in the midst of studying for the legal bar exam.  I fail to note what he purchased, but this place seems to attract highly intelligent people under a lot of stress.

When retail space became available above the Continental Club last fall, antique dealers Laura Levine and Mike Hildebrand jumped at the chance to cash in what they call their “401k.” These vintage shop owners-or “pickers,” as they call themselves-put their private collection, their own prized possessions, up for sale. 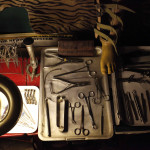 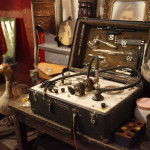 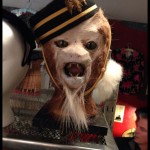 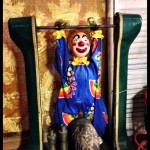 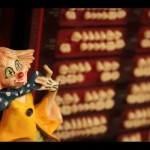 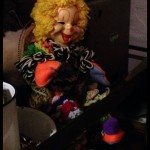 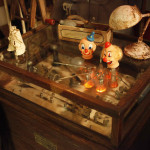 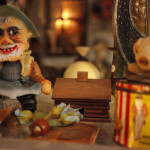 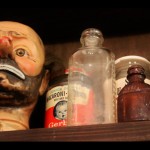 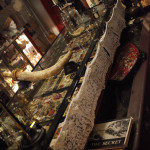 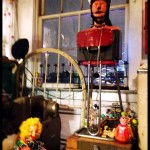 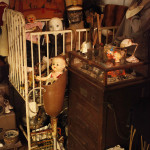 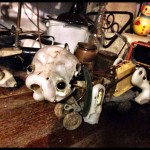 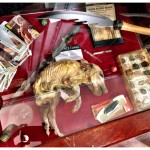 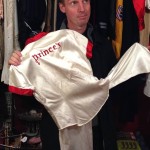 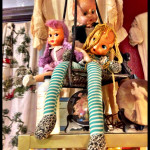 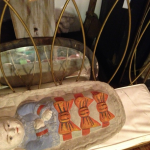 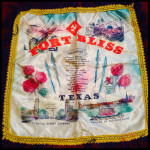 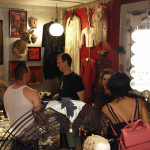 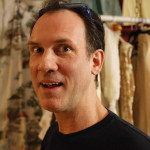 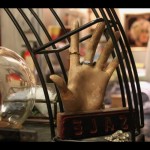 A pelican skull on top of a glass case, beside a giant scabbard made of pig bone, shaped and carved to look like an ivory scabbard which contains a tiny dagger that is deceptively, disproportionately small for its sheath.  A plastic CPR mannequin with holes where its nose and mouth should be, perched atop a glittery, red vinyl chair beside a window framing the downtown skyline, lit up, at night, but with an aura of otherworldliness behind a foggy haze.

A motorized toy puppy stripped of all its fur-its mechanized plastic skeleton exposed-looking grotesquely pathetic, yet somehow still endearing (in a steampunk kind of way).

A glass case lined with red fabric, containing a gem collection, a deck of vintage nudie playing cards, and a withered pig fetus.

A Prince’s Hamburgers uniform from 1949.  Bats, mounted in frames like butterfly specimens. A mummified opossum wearing an abandoned insect colony.  A satin pillowcase with a gold lace border and blue fringe, bearing images of roses alongside missiles and uniformed men in trenches with bazookas and anti-aircraft artillery, and a poem to an anonymous “sweetheart” stationed at Fort Bliss.

Loads of pretty dresses from the 1950s and earlier, and cases upon cases of brilliant, colorful baubles strung together in luxuriant jewelry designs.  This is The PLACE Upstairs, our local cabinet of curiosities.

When retail space became available above the Continental Club last fall, antique dealers Laura Levine and Mike Hildebrand jumped at the chance to cash in their “401ks”. These vintage shop owners-or “pickers,” as they call themselves-put their private collection, their own prized possessions, up for sale.

“Our wealth is in antiquities,” says Hildebrand.

Perhaps there is a tie-in to rise of “steampunk,” but it seems like more and more of these types of places are popping up here and there. One of the best-known is the taxidermy shop Deyrolles, in Paris (which opened in 1831-not exactly recent).  There is the Mutter Museum in Philadelphia (which features the skeletons of Siamese twins, giants, dwarves, the mummy of a great fat woman who was buried in soil with high lye content and whose body consequently turned to soap, a variety of brains in jars lining one shelf, and a whole wall of picks that were used to perform lobotomies-so creepy). There is Paxton Gate in San Francisco, and the Museum of Jurassic Technology in Los Angeles (Culver City). The local theater troupe Boo Town recently produced an original shadow-puppet show about the objects in a cabinet of curiosities called The Curio Show.

Mike and Laura aren’t without their critics. They do deal in animal carcasses sometimes, and not everybody likes that.  It’s not uncommon for them to get hate mail.  Despite their taste for the macabre and gory, though, Levine and Hildebrand are two of the warmest people you could meet.  In fact, you might say it’s because of their comfort in dealing with taboos that “normal” people ordinarily suppress that they’re so playfully charming.  Levine and Hildebrand aren’t even trying to hide the skeletons in the closet-they’re putting them on display!  Their critics, on the other hand-like the people who rain down damnation upon them-sound truly unhinged.

“The more we deny that we have a dark side,” said actress Sheryl Lee, “the more power it has over us.”

Stop by, say hello, and air out some of your own cobwebs. Sunlight is the best disinfectant, after all. (Note: The PLACE Upstairs is not usually open while the sun still shines.)

The PLACE Upstairs is located at 3708 S Main St @ Alabama, right above the Continental Club.  Look for the sign out front.  They are open from 8 pm - 1 am, Thursdays, Fridays, and Saturdays.

One Response to Space [City] Oddities