Leon casino, A collection of original Frank Frazetta paintings are on display in Austin courtesy of Robert Rodriguez. The Frank Frazetta Museum, at 920 Congress in Austin, will host the exhibit through March 21. (Noon to 8 pm., with a $10 admission.)

On a walking tour of the paintings last Sunday morning Rodriguez told Free Press Houston that when Frazetta died in 2010 he was contacted by the family regarding how to handle the legacy of his art. Restoring the reputation of Frazetta as an artist is part of this legacy and the oil paintings on display attest to the brilliance of his vision. There’s a self-portrait Frazetta did of himself after he saw his reflection in a mirror one day and realized he was in a very bad mood. 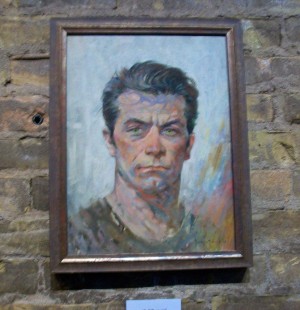 Proceeds from the exhibit go towards preservation of the art. In addition to his works of pure fantasy themes associated with the books of Robert E. Howard and Edgar Rice Burroughs, Frazetta also designed the poster (unused by the studio) for the Rodriguez helmed From Dusk Till Dawn. That painting is featured prominently and Frazetta put in the figures of the film’s stars George Clooney and Quentin Tarantino reluctantly. Frazetta only wanted the solitary image of a girl and a snake. Instead of the film’s vampires Frazetta used his fantasy creatures seen crouching in the painting’s bottom corners.

Currently Rodrigues is in pre-production on a remake of the 1983 Frazetta and Ralph Bakshi collaboration Fire and Ice. 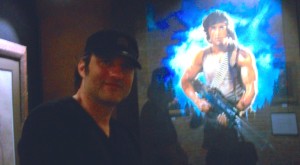 Additionally the exhibit also features art by Frank Miller (Sin City), Sebastian Kruger and Drew Struzan. Rodriguez owns the original art Struzan did for First Blood and explained how the eventual release poster toned down the vividness of the original. Other works of art include props from various Rodriguez films and a series of collaborative portraits that Rodriguez made with stars of his films.

Another Rodriguez original is a small painting he did while he was still in the process of selling the original El Mariachi to Columbia Pictures. The small painting is dark with emphasis on blacks and reds and the figure sports an armored hand.

Deep Cuts Fills Up The House