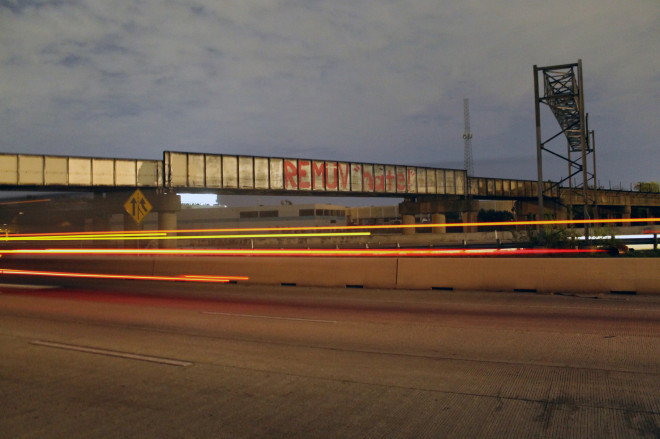 Houstonians love, loathe and overanalyze the hell out of those nine letters. They were painted last year on the railroad bridge over I-45 and created endless debate on what is or isn’t objectively good street art. But according to the graffiti artist, he simply wanted to take a gallon of paint, spread it a dozen feet high, get someone’s attention and hopefully, make their day.

Leon casino, Remüv (not his official handle) met me in a Montrose café last month to throw light on the piece. Not to give away too much (we agreed to anonymity after all), but he’s a Houstonian with the look of a graffiti artist. Or a graffiti artist who pursues life as a Houstonian, depending on your perspective. Remüv has a day job, a significant other and an infant daughter. As I sipped coffee, he drank iced tea and ate a Cajun style burrito stuffed with jambalaya-which he referred to as lunch and dinner.

The most demanding question I had, aside from why a graffiti artist felt the need to hover over hellacious traffic, was how he did it. The only access to the bridge is up steep, bramble-covered concrete. Shaky metal grates and a thin chain are the “walkway” on the bridge until the halfway point, where they disappear.

“So there’s the top of the bridge, and then here are the train tracks,” Remüv said, motioning his hands to illustrate the foot-long gap which dropped straight down to I-45. “And I’m on the train tracks with my body standing over, my roller hanging down.”

As he stood over the gap, he said, one thing went through his mind: Trains.

“A couple came, too. You have to watch out for the conductors. They’re not going to stop the train for you. That’s not their job. A good Samaritan will call the cops. One phone call to HPD can really get me in a bind, but you’ve just got to get under the tracks and they’ll never see you.”

And they didn’t. As for what motivated Remüv, he told me that a rut of depression left him with a need to go into the city and leave something that would be an opposite expression.

“An expression that can do some good maybe. And a year later, it did,” he said. “It got a lot of people’s attention. In the street art community, I get sass because of this and that, but the thing about street art politics is it’s just that: politics. The people who see [the piece] day to day-who really aren’t involved in graffiti-they notice it: your high school teen, or the lawyer who’s having a bad day. Even Slim Thug gave me a commend [sic]. It brought the city together, you could say. There was an outcry, which ended up good.”

The outcry (outside the street art community) ranged from posts on Houston forums, social media and of course, the Houston Press, which ran a story titled: “REMÜV: Latest Contender For Houston’s Lamest Graffiti ‘Artist’ “. Apparently use of the umlaut (dotted U) simply killed the writer. We can only hope. Though Remüv was offended for a different reason.

“ZZ top. Screw me-she (the writer) bashed ZZ Top on the day of their 15th studio released album,” he said. “Do you KNOW what city you’re in?”

Incidentally, HP went so far as to compare Remüv to that one moron who defaced the Picasso piece in the Menil Collection last year, as well as incorrectly attributing the “BE SOMEONE” piece (same bridge, other side) to Remüv.

“BE SOMEONE is actually by a guy from the south side. I don’t have any connection to him whatsoever,” Remüv said.

“Yeah. They think my name is ‘Remüv Hate’,” he said. “I did a mural, just to specify, in the northside about four months ago.”

When not dangling off a railroad bridge, Remüv said he picks buildings appropriately.

“No live businesses,” he said. “No federal, no religious. I like buildings that are old. Old and in need of color. They’ve usually been abandoned for several years if not more.”

An additional tactic Remüv favors is tipping the Y-axis.

“I don’t like painting on the ground-level. It’s either above or below the driver’s eye. It gives you a lot more time. And in the instance where you’re on top of a 13-story building that’s been abandoned for 20 years, you’re looking down at the city, and realize that you may be the only person who has seen that view in some time. It’s therapeutic almost.”

Near the end of the coffee, tea and burrito I asked if Remüv thought there were any major misconceptions the public had of street artists.

“I think people simplify it too much: the idea that people paint. In reality, it’s a society. These street artists, graffiti artists, are expressing themselves in their purest form. It’s putting their heart and soul into what they can. I think people miss that reason a lot, or miss the idea that there is a reason. A lot of times it’s the feat that’s more important than the outcome. Climbing the mountain instead of claiming it.”

And that’s the point: Remüv climbed the bridge to communicate via graffiti. Not to paint a picture for no reason. Street art pretty for the sake of being pretty tends to suck anyway, especially when it doesn’t match the urban industrial surroundings that are Houston. Remüv’s letters blend in. They’re ugly gorgeous, just like the city.

“Graffiti saved my life, but right now I live for my daughter,” Remüv said. “It’s something I want to transfer to her-the understanding that if you want to do something in this day, and age, and this country: you can. If you need proof, it’s written up high in big, juicy letters.”