Leon casino, Chinese Puzzle has a bouncy comic touch and some solid laughs. Essentially a French sex farce, CP comes from writer/director Cédric Klapisch and reunites him with a few of the stars of one of his previous films L’Auberge Espagnole (2002).

Things get complicated fast when Romain Duris tells his wife (Kelly Reilly) that he wants to help his lesbian friend (Cécile De France) conceive a child. Duris and Reilly already have two children. Subsequently Reilly tells her husband she’s met someone else and wants a divorce, the kids, and is moving from Paris to New York City. As coincidence would have it De France, now pregnant (artificial insemination), and her partner Sandrine Holt have also moved to the Big Apple. Duris himself soon follows and now everybody is in America, either enjoying life or trying to gain citizenship.

Klapisch has a wild visual style that at times looks animated and at other times takes on a diagram step-by-step approach where we watch the characters get from A to B, which could also be called the thematic spine of Chinese Puzzle. For instance a dynamic sequence shows Duris taking the subway to get around New York. At times we’re there in the car with him and yet he’s surrounded by graphics that chart his route. 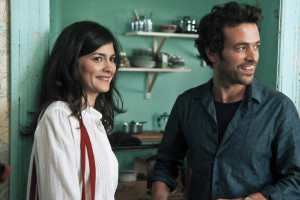 A sort of “chinois consciousness” occurs to the different characters as they interact with people who are foreigners just like themselves. Duris marries the relative of an Asian cab driver he previously had rescued from a traffic altercation; Holt uses her connections to get Duris an apartment in Chinatown; and Audrey Tautou pops up as a former love interest of Duris who herself is in America working for a Chinese company. Tautou has one scene where she speaks flawless (if accented) Chinese at a board meeting. Another scene reminds the audience that this is a lively sex romp as several of the characters race to a common meeting location unaware that De France is using the space to have an illicit affair with her babysitter.