Leon casino, I’m not here to debate whether Godzilla is good or bad. The new Godzilla is simply a great film, hands down (which is better than thumbs up). Rather let’s look at some of the reasons why Godzilla works so well.

Director Gareth Edwards in his sophomore outing delivers a monster movie that constantly conjures images of darkness. When we glimpse Godzilla, or his nemesis duo of M.U.T.O.s (Massive Unidentified Terrestrial Organism), we’re peering through smudged glass, or seeing objects in the muted colors of night. If we spy the monsters briefly in the sun it’s as doors are closing. It’s nearly halfway through Godzilla before we even get a good glimpse of its face. Notice the eyes, they’ve been enhanced with the same Mocap technique as used in films like Planet of the Apes. 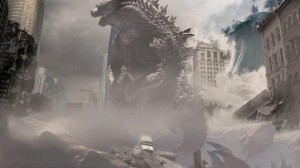 Only at the end of the film do we bear witness to Godzilla freely walking about in daylight, and by then we’ve kind of come to like the big lizard. Godzilla might even be our savior. Godzilla certainly has personality, not unlike Mr. Ed or Arnold Ziffel. Godzilla might even practice yoga since at one point he appears to light up his chakras in sequence and blast forth with the breath of fire.

One sequence in particular emphasizes the connection between subconscious and conscious images. Four soldiers check out a railroad bridge at night, two on top and two at the bottom. We cut to an overhead shot of the two troops on the bridge as they walk across. The metal tracks to their right and left are solid but the planks of wood they walk on are spaced far enough apart that if their footing is unsure they will fall through. Indeed one of them drops his flashlight and it falls to the ground far below startling the men walking along the bottom. How many times have you had a dream where every moment, every step was hindered by some sort of obstruction? 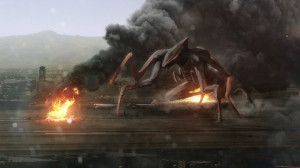 Godzilla the movie has the good sense to know when to provide the big reveal and when to build the action to support its spilling of secrets. Among the humans in the cast are Bryan Cranston, Ken Watanabe (who has the best line when he names the monster), Sally Hawkins, Juliette Binoche, David Strathairn, Elizabeth Olsen and Aaron Taylor-Johnson. By and large their motives are spurred by survival and preservation. Godzilla has motives too and deep down you can’t help but think those feeling involve empathy towards the humans trying so hard to destroy him.

Tech credits are a plus especially sounds of destruction, monster noises and the cinematography that hides as much as it shows. 3D effects were superficial and not necessary to enjoy the ride.